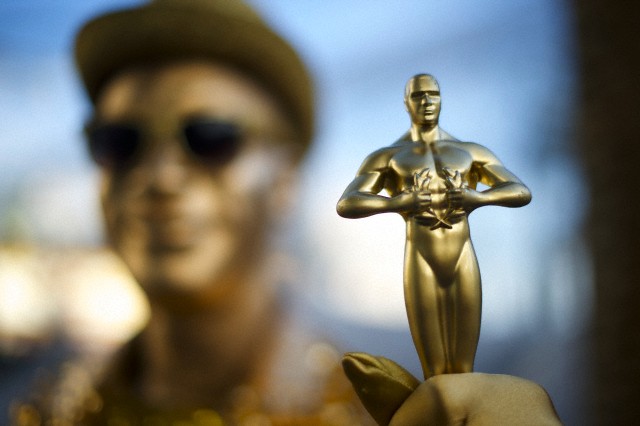 And at the stroke of midnight we’re done. It was a long night, but the best film came out on top at the end. As for our Oscar picks, we went a perfect six for six. Thanks so much for joining us on our Oscars live blog, and again, feel free to join the conversation on Twitter (@Zoomer), on Facebook (www.facebook.com/everythingzoomer), or in the comments section below. Goodnight!

“Everyone deserves not just to survive, but to live.” — director Steve McQueen gives an emotional acceptance speech saying this film is Solomon Northrup’s legacy, and dedicating the Oscar to all of those who suffered from slavery in the past, and still do today.

Again, back at TIFF we knew this film could go all the way.

11:55: Last award of the evening: Best Picture. Our pick is 12 Years A Slave. Will Smith out to present.

McConaughey thanks God, family, his hero (which is his unattainable self). Very genuine, sweet acceptance.

That’s not to take away anything from McConaughey, but Chiwetel Ejiofor was utterly, undeniably brilliant in his performance.

11:48: Jennifer Lawrence out to announce best actor. Our prediction is Matthew McConaughey, but it really, REALLY deserves to go to Chiwetel Ejiofor.

Great acceptance speech, as Cate pays tribute to her fellow nominees, champions the success of female character-centred films, and thanks her family and colleagues.

Honestly, I wasn’t a fan of Blue Jasmine, but it’s pretty much impossible to argue against giving Cate Blanchett any acting award.

We’re three for three in our predictions, for those keeping score at home (which is pretty much just me).

11:32: We are back, and Angelina Jolie takes the stage with Sidney Poitier to present the award for best director. Jolie has some touching words for Mr. Poitier to start, while he asks Hollywood to “keep up the wonderful work.” So great to see Sidney Poitier on stage at the Oscars.

As we go to commercial, we hit the 3-hour mark. Still most of the big awards to go…

11:23: Ellen collecting money to pay for the pizza. Then introduces Robert De Niro and Penelope Cruz to award the Oscar for best adapted screenplay. Come on 12 Years a Slave!

And right after that, WINNER, BEST ORIGINAL SONG: “Let It Go,” Frozen, Music and Lyric by Kristen Anderson-Lopez and Robert Lopez

11:12: It has officially been half an hour since the last award was handed out. Think about that. Jamie Foxx and Jessica Biel out now to award the Oscar for best original score.

11:08: And now John Travolta a performance of the final best song nominee, “Let It Go” from Frozen.

11:05: Goldie Hawn out to introduce another video package. Thank goodness. It’s been almost 10 minutes without one. I was starting to get worried they’d run out of them.

Oddly enough, I just saw the episode of Seinfeld where Bette performs in Rochelle, Rochelle the musical the other day. I really wish they’d put her talent to better use on this show instead of an over-dramatic, heavy-handed tribute.

Bette Midler is out following the “In Memorium” to sing “Wind Beneath My Wings”. Yes…really…

10:53: Glenn Close is on stage to introduce the “In Memorium” tribute

And now, at 10:48…yes, 10:48…we have another POINTLESS “Heroes” video package. You’d think after 85 years of practice the Academy could get the timing of a show right.

10:42: Ellen back, dressed as Glinda the Good Witch from the Wizard of Oz. She introduces Jennifer Garner and Benedict Cumberbatch to award the Oscar for production design.

If we’re going to have all these homages and videos and skits and such, could we at least hand out the tech awards at a different ceremony? Pink has a great voice, and I love The Wizard of Oz, but it’s 10:37 and we still have a ways to go….

And heeeere’s Whoopi! She’s here to help celebrate the 75th anniversary of The Wizard of Oz. She has Judy Garland’s children, including Liza Minnelli, take a bow, and then introduces Pink to sing “Somewhere Over The Rainbow”

Also, thought I’d…ahem… take the time to mention we’re perfect so far in our Oscar predictions.

Gravity sweeping the tech awards. Who saw that coming?

10:25: Bill Murray and Amy Adams take the stage to announce the winner for achievement in cinematography.

This is the Oscars — couldn’t they hire an actress to play the “Academy rep” to make the speech more bearable?

If the Oscars had put all of these time-wasting skits back to back I could have watched The Walking Dead and not missed anything important here. Speaking of time-wasting, here’s an Oscar rep to test your eyelids’ resolve to stay open.

10:21: Awkward return from commercial with announcer asking for applause and Ellen instructing pizza delivery guy what to do. She does, however, “deliver” on her promise for pizza for the stars in the crowd.

“No matter where you’re from your dreams are valid.” — Lupita Nyong’o

No one was more deserving of that award. Not by a long shot. Lupita accepts with a tearful and heartfelt speech, paying homage to the pain and suffering those who suffered under slavery endured.

10:11: Christoph Waltz, smiling and cheery, out to announce the best supporting actress award.

Chris Hemsworth and Charlize Theron are out to present the awards for sound mixing and sound editing.

10:02: Wow, Ellen with a bad “Lupita, you gonna have some pizza?” joke that’s on par with Letterman’s “Oprah, Uma” confusion. She follows up, though, with a massive, star-studded selfie with Lupita Nyong’o, Brad and Angelina, Meryl Streep, Jennifer Lawrence, and others.

9:54: Ellen with a costume change to a white tux, and introduces Brad Pitt…who then introduces U2 performing “Ordinary Love” from Mandela: Long Walk to Freedom, nominated for best song.

WINNER, BEST FOREIGN LANGUAGE FILM: The Great Beauty (!!!) I’ve been saying it since TIFF — this film is awesome.

9:48: Best Foreign Language film is up next. I can’t stress enough how much I want The Great Beauty to win.

Kevin Spacey is out in a fantastic tux to talk about recent Hollywood honorary Oscar recipients, including Angela Lansbury and Steve Martin. He throws in a House of Cards homage, and a Jack Lemmon impersonation.

One of the backup singers from the film serenades the crowd! Bill Murray the first to jump up for a standing ovation. Very nice.

9:37: Ellen offers to buy pizza for everyone, and then Bradley Cooper is out to present Best Documentary.

Anders Walter was literally thanking his SICK MOTHER when they cut him off with music. Stay classy, Oscars orchestra.

Fun fact: I randomly chose Helium in my Oscar pool. So yeah…go Helium.

Meant to mention this during the last video montage, but what’s the point of this whole “Heroes of Hollywood” theme for the night? The real Hero of Hollywood is the person who keeps this show under three hours. Am I right?

Well, no real surprise there. Now Zach Efron introduces performance of best song nominee “The Moon Song” from Her, performed by Karen O.

9:21: Joseph Gordon-Levitt and Emma Watson out to announce winner of achievement in visual effects. It’s got to be between The Hobbit and Gravity, right?

9:17: Sally Field out to introduce a video montage celebrating heroes of film.

Wow, THREE people accepting an award and they co-ordinate the speech, deliver it perfectly, thank everyone, and DON’T get cut off by the music! This is like the bizarro Oscars.

McConaughey and Novak double up to announce the best animated film.

Witz says winning the Oscar “feels like the American dream.”

Now Matthew McConaughey and Kim Novak are out to announce the best animated short film.

9:10: We’re back and Ellen is handing out lottery tickets to Bradley Cooper.

9:06: Channing Tatum introduces a group of young filmmakers as we go to commercial. Almost 40 minutes in and it’s been a tight show, quick acceptance speeches, no one played off by the music so far…

9:03: Harrison Ford takes the stage to preview some of the Best Picture nominees. He couldn’t have sounded less enthusiastic.

So, Jackass’ Bad Grandpa doesn’t get its Oscar. For those keeping score, that’s two out of three awards for Dallas Buyers Club so far.

Sam and Naomi now present award for makeup and hairstyling.

Pharrell dancing with a number of best actress nominees in the front row.

8:50: Now Kerry Washington out to present one of the nominees for best song: Pharrell Williams with “Happy” from Despicable Me 2. And yes, he’s wearing the hat.

8:48: Jim Carey out to talk about animated heroes and pays tribute to one of his real-life heroes, Bruce Dern. Also, he’s got a pretty cool blue jacket on.

Touching, genuine speech. So glad the orchestra wasn’t trigger happy and cutting him off.

Very sweet acceptance speech as Leto pays tribute to his mom, thanking her for “teaching me to dream.” Offers words of hope to people in Ukraine and Venezuela. Also dedicates award to the “36 million people who’ve lost the battle to AIDS.”

8:41: Anne Hathaway out to announce the award for best supporting actor.

8:37: Ellen teasing Jennifer Lawrence about falling when going to accept the Oscar last year, and on the red carpet this year. “If you win tonight we should bring the award to you.”

8:35: The theme of the show is “Heroes in Hollywood.” The real Captain Phillips and Philomena are in attendance.

8:33: Ellen is out with her monologue. Makes some jokes about various nominees. Points out Liza Minnelli and says it’s the best Liza impersonator she’s ever seen.

8:30: Here we go! The Academy Awards — the most exciting seven hours in awards show television!

8:25: After an hour and a half of red carpet watching I feel the urge to tell you who I’m wearing: pyjamas, by Zellers.

We’re about 15 minutes away from the beginning of the 86th Academy Awards. I’ll (@MikeCrisolago) be live blogging all of the big news from the show right here starting in just a few minutes, so don’t forget to join the conversation on Twitter (@Zoomer), on Facebook (www.facebook.com/everythingzoomer), or in the comments section below. We’ll be sharing our favourite reader observations about the show!

In the meantime,check out my picks for who should take home the hardware for the “Big Six” awards on Hollywood’s biggest night:

Who Should Win: Chiwetel Ejiofor. The best actor in the most powerful film of the year.

Who Will Win: Matthew McConaughey. He’s one of the darlings of awards season this year, so unless Academy voters toss their support behind DiCaprio, this is McConaughey’s to lose.

Who Should Win: Meryl Streep. I know it’s cliché, but there’s a reason – she’s brilliant. Judi Dench or Sandra Bullock would be great choices too.

Who Will Win: Cate Blanchett or Amy Adams. I wasn’t a fan of Blue Jasmine, and Amy Adams has already won awards for American Hustle, but the statue is likely to go to one of these two.

Who Should Win: Michael Fassbender, though Barkhad Abdi would be an incredible story considering it’s his first film.

Who Will Win: This is a tough one. If I had to bet I’d put money on Jared Leto, though I have this nagging voice in the back of my head telling me Jonah Hill is taking it home.

Who Should Win: Lupita Nyong’o. I know I keep going back to 12 Years a Slave, but watch this film and tell me Nyong’o didn’t leave everything she has on the screen. Squibb would be a great choice too, but I think Nebraska’s more a critical darling than an award show one.

Who Will Win: Lupita Nyong’o. It’s her year. The other nominees are great, but anyone other than Nyong’o is simply a mistake.

Who Should Win: Alfonso Cuarón, for the breakthrough in filmmaking that was Gravity.

Who Will Win: Alfonso Cuarón. I don’t see Gravity taking home many major awards, but I think this should be a lock.

Who Should Win: Need I even write it? 12 Years A Slave of course. Philomena would be great too.

Who Will Win: Could be 12 Years a Slave, though Gravity, Dallas Buyers Club, American Hustle, and Her are also realistic contenders.