China’s Forbidden City Opens Its Gates at the ROM 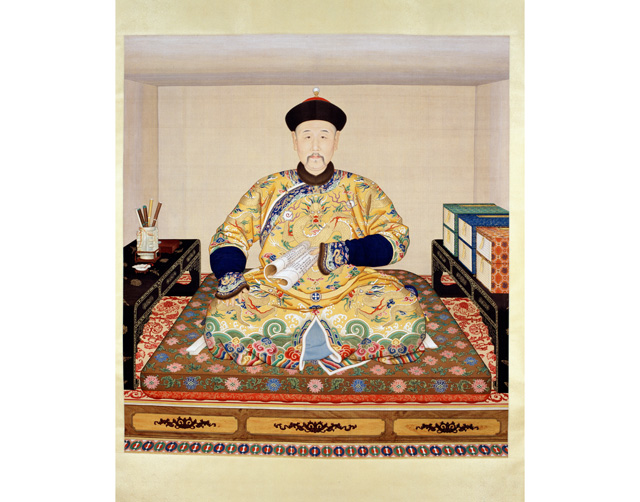 “Being ruler is tough” – that’s the personal motto of Emperor Yongzheng, pictured above, who reigned over the Chinese empire from 1722-1735, during the country’s final, Qing, dynasty.

The motto, ironically, appears beneath an ink and silk album of the Emperor enjoying a number of leisure activities, including sitting by the water, playing music, sitting again (this time on a rock), and hunting, as part of the Royal Ontario Museum’s new Forbidden City: Inside the Court of China’s Emperors exhibit – the centerpiece of the museum’s centennial year.

Perhaps, however, I’m being too hard on Emperor Yongzheng. After all, history remembers him as a tireless champion of social reform whose personal life was chaotic, and who is believed to have been assassinated in his mid-50s.

And it’s not like everything within the Forbidden City, the name of the Imperial Palace and its grounds, was always peachy. Consider the area known as The Hall of Supreme Harmony. Sounds nice, right? Well it caught fire four times within a century, including once after being struck by lightning.

Still, the digs within the Forbidden City, which existed for 500 years between the 15th and 20th centuries, were pretty sweet.

RELATED: The ROM Turns 100: An Interview with CEO Janet Carding

In partnership with Beijing’s Palace Museum, the ROM’s Forbidden City exhibit is like a tantalizing peek over the walls of that big house down the street that you’ve always been fascinated with, but whose owners won’t socialize with the neighbours. Of course, when I say big house, I mean big – it took an hour and a half to walk from one end of the nearly 8 million square foot Imperial Palace to the other.

The ROM exhibit employs more than 200 artifacts – from artwork to weaponry to ceremonial treasures and even an Imperial throne set – some of which have not only never visited North America, but have never left the Forbidden City’s walls.

The tour starts in the Outer Court, where only a very select few, important visitors ever ventured. Museum patrons enter and find themselves almost immediately at the foot of the Emperor’s throne, behind which his ceremonial armor, sabre, and Imperial saddle – complete with Imperial creases from his Imperial behind – reside. Perhaps most awe-inspiring, however, are the giant, ornate bells that used to announce the Emperor, as well as a giant set of stone chimes.

Moving into the Inner Court, where only the Emperor, his family, and his servant eunuchs could enter, one gains a sense of what imperial life was like for the 24 rulers who lived there. It’s a place where the practical meets the royally ornate – think Emperor Puyi’s gilt and lacquered red and gold bathtub, stunning porcelain, large treasure boxes, bejeweled fingernail guards to protect Imperial ladies’ fingers, ceremonial dress (including a full body outfit for the Imperial pooch) and more.

The space also contains a few of the nearly floor-to-ceiling screen paintings from Emperor Yongzheng’s “Twelve Beauties” collection – described by the Palace Museum as, “(following) the custom of depicting ladies of the court as women of elegance and natural grace. The artist portrayed these imagined beauties at leisure activities such as sampling tea, watching butterflies, and reading, as well as showing them in quiet reflection.”

As well, the Inner Court boasts poetry and artwork created by various Emperors, a zither (string instrument) inscribed by the rulers who owned it, and the sedan chair servants carried the Emperor around on within the massive palace ground.

The journey ends with a short photo/film display documenting the fall of China’s last Emperor, Puyi, who inherited the throne when he was just shy of three-years-old, in 1908, and was overthrown only four years later during the Xinhai Revolution.

Because of the number of artifacts on hand, some items will be rotated in and out of the exhibit about halfway through its run. But don’t worry – if what’s on display now is any indication, they’ve got some pretty cool stuff in storage.

Make sure you check it out. It took 500 years for the Forbidden City gates to open to the public. If there was ever a time to run right in, it’s now.

The Forbidden City: Inside the Court of China’s Emperors runs from March 8-September 1, 2014. Click here for more information on the exhibit and related activities.

* An Imperial pass, granted by the Emperor himself, was required to pass through the palace gates after dark.

* The main colours featured in the palace were red and yellow – in related news, no one could use the colour yellow in any way outside the palace unless the Emperor gave the go-ahead personally.

* No women were allowed in the palace’s Outer Court – not even the Empress. Talk about “forbidden.”

* If the Emperor was present in the Outer Court, visitors were required to remain perfectly silent. Even a simple cough carried punishments.

* Only people in positions of authority up to four levels or less below the Emperor could pass through the Forbidden City’s gates.

* The five-clawed dragon was the Emperor’s personal symbol, and woe to anyone but the Emperor who tried to use it for themselves.