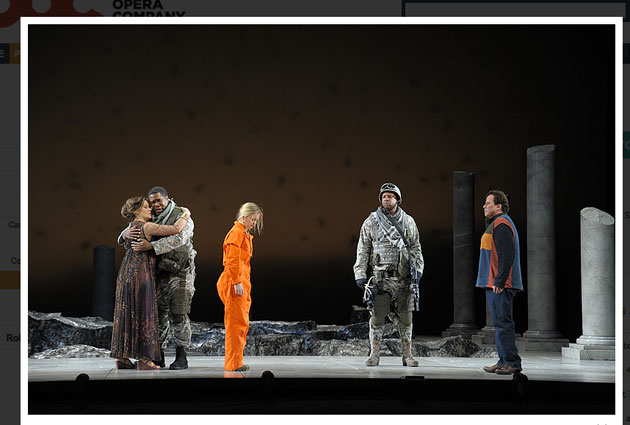 Ask Harry Bicket, who’s conducting the Canadian Opera Company’s Hercules opening Saturday for seven performances, whether it’s changed from the Chicago Lyric Opera’s co-production two years ago and he replies, “Very crucial parts changed. The whole dynamic of the opera changed. It was flipped on its back.”

Ask him how and why it changed, and he defers to the director. “You’d have to ask Peter Sellars.”

The famously inventive and charismatic director has an explanation that is both philosophical and practical.

“The first time, in Chicago,” he says, “we were trying to make our way and understand it. Here, we were able to go back in and look more deeply — and see deeper things in the mirror.”

Also, even though the leads are the same as in the Chicago production, the lives of two principal cast members changed profoundly in the last two years– and Sellars changed the production to reflect that.

The opera’s libretto is based on a Greek drama by Sophocles about returning soldiers.  Sellars chose to set it modern times in America, with veterans of the war in Afghanistan. The great general Hercules returns to his family, his wife Dejanira and adult son Hyllus, with a concubine, Iole, taken as a prisoner of war.

What changed since Chicago is that Lucy Crowe, who plays Iole, is five months pregnant, and Richard Croft, who is Hyllus, had hip surgery, though he is fully recovered.

So Sellars was inspired to modify the production to take into account these two life events. He’s identified Iole as a pregnant concubine and Hyllus is now severely disabled. “I’ve put him on crutches,” explains Sellars. “He can barely walk.”

Hercules “returns from his war adventures with a captive young girlfriend who is pregnant — that shifts a lot of things in the home life. And Lucy, with changes in her physicality — a pregnant woman subjected to a lot of abuse — is quite traumatized.”

In the COC Toronto production, he says, “People (in the opera) are going into it with a different sense of emotional burn, self-doubt, inadequacy and aggressive denial.”
And people in the audience will be going in to “dark, weird places of the human mind and human heart.”
All of this, in turn, will also change how the music is performed, says maestro Bicket.
“The great thing about this music,” he says, “is that it can take all sorts of treatment. It’s very direct, but not one dimensional. An aria that had a furious edge suddenly has a more insidious, jealous or doubtful or suspicious edge.”
Changing what happens on stage, he says, changes how the music is played. “It changes the tempo, the attack of the strings, how we phrase something, the direction of the phrase.”
But you don’t have to be aware of any of this,” insists Bicket. And maybe shouldn’t be.
“It’s great when people don’t separate one element from another,” he says. “It’s an amazing coming together of all these disparate elements — stage design, conducting, singing. The best performances are such a complete whole that you’re just blown away.”