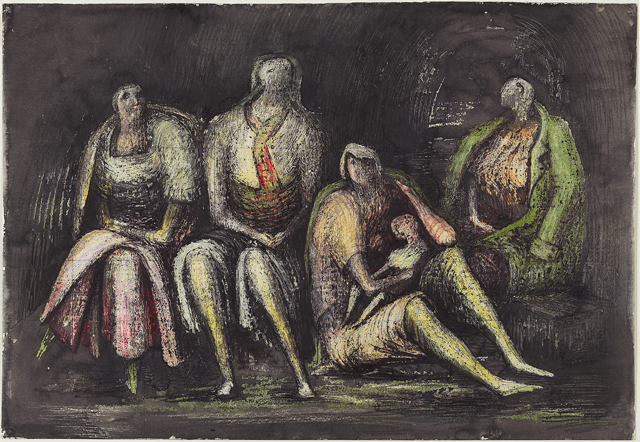 Weaving my way through the crowd gathered at the Art Gallery of Ontario for the unveiling of the Francis Bacon and Henry Moore: Terror and Beauty exhibition, more than one person wondered aloud how the gallery would explain the unusual pairing of two very different artists.

To paraphrase a speech by Dr. Francis Warner, Oxford Emeritus Fellow and friend of both Bacon and Moore (and who also helped launch the exhibition), the former was born into material privilege but maternal (and paternal) indifference in 1909. He went without any art education, fraternized in London’s seedier corners, and was generally a loner who “lived a homosexual urban bachelor.”

Moore, by contrast, was born 11 years earlier into a loving, working class family, enjoyed art education at multiple institutions, had a healthy disposition and marriage, and proved “conscientious and socially responsible.”

What the two have in common, Dr. Warner points out, is war.

Both artists are “products of the same violent and war-scarred half-century,” they each had roles to play in the Second World War (Bacon fighting fires and helping recover bodies, Moore training soldiers in bayonet combat), and both experienced first-hand the devastation of the Nazi blitzes on London.

“Not surprisingly they view the human body through tears,” Dr. Warner notes, referring to their respective artwork. “The difference between them is that Moore’s are tears of wonder, and compassion: Bacon’s of physical ecstasy and horror.”

He’s right, as a stroll through the exhibition reveals two parallel, vividly authentic narratives reflecting the brutal time in which both of these artists lived.

The exhibition is divided into a number of themes, from humans to hybrids to popes and the crucifixion (intriguing, as both artists were atheists). Works by Bacon and Moore are often paired and contrasted throughout, with the paintings and sculptures punctuated by the black and white photography of Bill Brandt, whose brilliantly haunting photos of London during the blitzes deserve an exhibition all their own.

RELATED: David Bowie Is…Dazzling at the AGO

Upon entering you’ll encounter Moore’s sketches of Londoners huddled and sleeping in the city’s famed tube during the bombings, where the artist also took refuge (a Nazi bomb flattened his studio). The sketches seemingly come to life when you turn the corner and find Moore’s large “Reclining Figure” plaster cast, “who rises up as if bracing herself against the aerial assault above.”

The rest of the exhibition includes both artists’ takes on the crucifixion, which Bacon called “a magnificent armature on which you can hang all types of feeling and sensation,” as well as Moore’s “Mother and Child,” “Warrior and Shield,” and various other sculptures and sketches. Meanwhile, Bacon’s eerie papal portraits and distorted triptychs, and sly “Lying Figure in Mirror,” reflect the artist’s belief that, “…..the greatest art always returns you to the vulnerability of the human situation.”

The title of the exhibition, Terror and Beauty, pretty much sums up what you’re getting here. On one hand, it’s difficult to place yourself in the realm of such fear, evil, and suffering that inspired much of these works. On the other, as Bacon noted, it’s not his art, but life itself, that is violent. From that perspective it’s remarkable how these two artists distill those experiences into such multi-layered, provocative pieces.

“I believe all great art comes alive in the contemporary moment,” AGO director and CEO Matthew Teitelbaum noted. “[It] helps us understand the context and issues that we deal with everyday.”

Of course, if the deeply personal works of two of the 20th century’s greatest masters isn’t enough to lure you, Dr. Warner suggests thinking of the exhibition as a salute from two great Britons thankful for Canada’s role in ending the horror of war that nearly engulfed their homeland.

“I am of the last generation who lived through that crucifixion of London, survived – just – through the heart, and heat, and sorrow of it for five long years. Your generous parents, and grandparents, came to help save us, and the persecuted minorities, from that monstrous killing machine, that world evil that had swallowed Europe,” Dr. Warner said, reading the final lines of his speech. “Both Henry Moore and Francis Bacon knew this. We talked of it…I am left alive now because you spilt the blood of your young to come to our aid. I embody tonight my country’s, and my own, deepest gratitude a human can bring.”