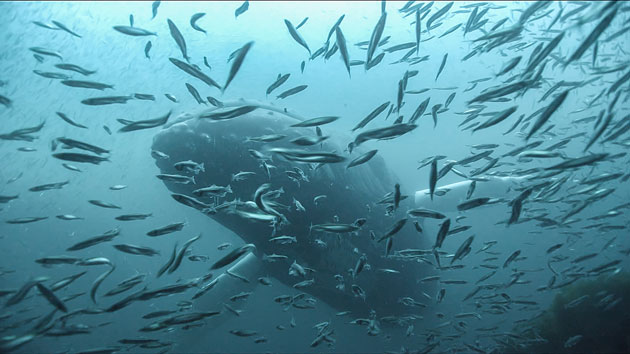 The unexpected happens in the wildest places

I had to leave a voice mail message when I first called Jeff Turner last week. He was filming off a sailing vessel just north of Bella Bella on the coast of British Columbia and when herring are spawning, you can’t tell them to take a break while you answer the satellite phone.

Turner, producer, director and principal cinematographer of Wild Canada, a four-part series that has just aired on the CBC’s The Nature of Things with David Suzuki, has had many “it’s now or never” moments in his 30-year career of filming wildlife. You can get some idea of the skill and risks involved in capturing the action in Wild Canada on Thursday, April 10th on The Nature of Things. This extra episode shows the behind-the-scenes adventures the crews lived while shooting the massive series.

While Turner usually does most of the filming, Wild Canada‘s scale made that impossible. He estimates he and Justin Maguire – an ex-BBC wildlife cameraman who now lives in Vancouver – shot more than three-quarters of the series. “Sometimes there would be three or four different things all happening at the same time in different parts of the country,” Turner notes. “One time we had four different camera crews out at the same time.” Using approximately 20 cameras, and even drone helicopters to photograph in remote areas, they captured intimate sequences of animals going about the business of life. They film beavers in their lodge; film humpback whales feeding on capelin; and go breathlessly close to grizzlies, capturing their movements at 10,000 frames per second, resulting in exquisitely detailed close-ups.

Thrilling as it was to finally look at the footage after hearing what the others had shot, there was then the daunting task of editing about 500 hours of material down to four hour-long programs. “Certain things end up not making it to the final product, which is always a painful process. The great thing about [filming] wildlife – it doesn’t age as some other things do, so it can survive and show up in other programs for many years yet,” Turner says.

His career has allowed him and his family to see parts of Canada most Canadians aren’t even aware of. (Princeton, B.C.-based Turner and his wife Sue, a wildlife photographer, often brought their two children on their wilderness film trips. Daughter Chelsea, 22 and son Logan both worked on the Wild Canada series.) “We wanted to show the corners of our country to the other corners … where we could sit down and realize what we have is pretty special on this planet,” he says. “At the same time, we hope to make everyone aware that we have an influence on this. This isn’t something that happens in isolation. We affect it all the time, and we have throughout our history. We need to be aware and think about what we do because you know, the choices we make have an impact on this natural world we live in and it’s very important to us, so we have to be aware all the time, of what we’re doing.”

In fact, the fourth episode concludes the series looking at the Arctic. “We’re making one of the biggest changes to the landscape in the history of the planet right now in the Canadian Arctic,” Turner notes. “It’s a fundamentally different change in what a human could have done in the past over thousands of years here. The first peoples that came into North America were making those changes over very long periods of time – thousands of years – whereas what’s happening today in the Arctic is happening in an eye blink. In just decades of time we’re changing it, unintentionally. It’s a different process, but it is happening, absolutely.

Unusual for a wildlife production, Wild Canada includes dramatized scenes involving humans, to underline the role humans had in shaping Canada’s modern landscapes. “Not modern humans,” Turner says, “but humans from thousands and thousands of years ago. Canada is fairly unique in the world in the sense that pretty well all of our landscapes were covered by ice thousands of years ago. It’s only the last 10,000 years they’ve really been exposed and became sort of natural wildlife systems that we have today. That’s a relatively recent time in world history to have all of this being formed in such a short period of time. The fact that humans were always present as that was happening is a fairly unique situation on our planet. Humans didn’t come into Canada into a landscape already formed. They were here as that landscape was forming and were having an influence on what happened. They definitely played a role in shaping the landscape that we see today.”

The series will air in the U.K. in May. Turner says wildlife shows usually sell to 50 to 60 countries. “Canada will be everywhere,” he chuckles. And once the world sees this series, wild Canada will be on everyone’s bucket list.

For an on-the-scene look at the filming of Wild Canada, watch the CBC’s The Nature of Things with David Suzuki, 8PM, Thursday, April 10. Find a companion interactive book app ($3.99), written by J.B.McKinnon, co-author of The 100 Mile Diet at Apple’s App Store.