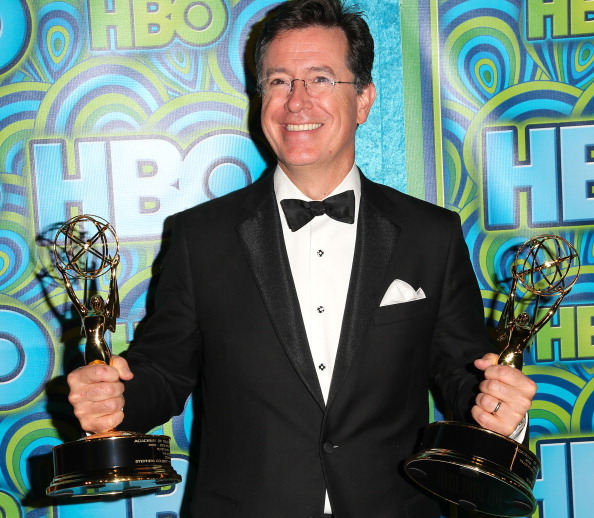 The late-night guessing game is over: CBS announced today that comedian Stephen Colbert, 49, Emmy-winning host of Comedy Central’s hugely popular Colbert Report, is set to take over at the Late Show desk when David Letterman steps down in 2015.

“Simply being a guest on David Letterman’s show has been a highlight of my career. I never dreamed that I would follow in his footsteps, though everyone in late night follows Dave’s lead,” Colbert said after the announcement. “I’m thrilled and grateful that CBS chose me. Now, if you’ll excuse me, I have to go grind a gap in my front teeth.”

Letterman, 66, the only remaining link to the Johnny Carson-era of late-night television following Tonight Show host Jay Leno’s retirement earlier this year, celebrated his 31st year as a late-night host last year – topping Carson’s record of 30. He announced his impending retirement on air last week, noting, “What this means now is that Paul [Schaeffer] and I can be married.”

With Leno’s retirement and the popularity of competing late-night hosts Jimmy Fallon, Jimmy Kimmel and Conan O’Brien, the writing was on the wall at the Late Show for some time. While Dave may be the most respected and certainly the most influential of the current crew, the late-night landscape is changing. Viewing audiences are skewing younger, and the ability to go viral on social media with a skit or appearance from the show each night is a must – something Colbert does regularly on his current show. Despite closing in on 50, he commands a massive following among younger views that certainly rivals that of his youngest late-night rival, the Tonight Show’s Jimmy Fallon, who is a decade his junior.

The only worry for fans of The Colbert Report – on which the host lampoons far-right Conservative American pundits by pretending to be one – is the demise of the host’s signature satirical style of comedy. It’s a valid concern, though one a comedian as naturally gifted as Colbert will surely find a way to transition from. The bigger question some are asking is why CBS went with a male host instead of separating themselves from the pack with a female (my personal choice to fill the Late Show spot was Amy Poehler). For the most part, however, the news of Colbert’s appointment has been met with enthusiasm.

As for Dave, he isn’t done yet. The specific date of his retirement isn’t set, so between now and next year, expect a slew of top-notch guests to drop in and say their goodbyes – and maybe a few surprises along the way, before Letterman hangs the microphone up for good. Perhaps, even, a visit from rival Jay Leno himself? We’ll see.