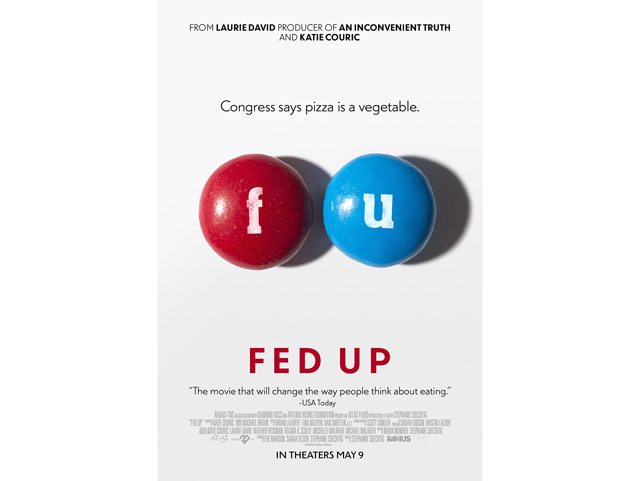 Choice Quote:  “Soda is the cigarettes of the 21st century.”

The Hype: An in-depth exploration of the role sugar plays in the global obesity epidemic and how “Big Food” continually does its best to change the conversation.

The Reality: Fed Up unleashes so much terrifying info about the collusion and deception that surrounds the food we eat and how it fuels the deadly obesity epidemic that it may have unwittingly become the first in a new genre I call “Documentary-Horror.”

Take, for example, one of the film’s earliest blows, where a newscaster notes the mind-boggling statistic that for the first time in human history more people are dying of obesity than of starvation.

From there, Fed Up illustrates how food lobbies (Big Food) have literally fed an unsuspecting public a steady diet of misinformation while burying the science that could sink them for good. The result, among other things, is a “tsunami” of debt as we look down the barrel of soaring health-care costs related to obesity.

It’s a very scary scenario when you see it all laid out, with everyone from the U.S. government to the World Health Organization to high-profile healthy living ambassadors (i.e., Michelle Obama) falling under the pressure of food company folk who seem to rival tobacco industry reps in the sleaze department.

Sugar, in all its forms, is the main culprit, especially in foods touted as “fat free” or “low calorie.” The film notes it’s eight times more addictive than cocaine, which helps explain some of the children interviewed who, as young as 14 years of age, are battling weight issues so serious they’re discussing their own mortality.

You might think you know all of this already, but there’s a lot more to this story than most people realize. The film employs everyone from scientists to former U.S. President Bill Clinton to help along the narrative, but is careful not to take an explicitly partisan political side. There’s lots of creative storytelling here, including animation and plenty of old television and film footage (as an aside, who knew Fred Flintstone was such a bad influence, pushing both Winston cigarettes and sugary children’s cereals to different generations of kids?).

If soft-drink companies are sponsoring health studies and fast food establishments sponsoring school lunch programs, there’s clearly a deep-rooted problem here. This film digs deeper, and what you discover may just cause you to lose your appetite.

Theatres or rent it? Theatres

Can the kids/grandkids watch? The filmmakers made it easy for grade school kids to follow the narrative, so encourage the grandkids to watch.

Fed Up screens tonight as part of Hot Docs Canadian International Documentary Festival at 6:30 at the TIFF Bell Lightbox in Toronto, followed by screenings on Thursday, May 1, at the Bloor Hot Docs Cinema and Saturday, May 3 at Hart House Theatre. Click here for times and further details.