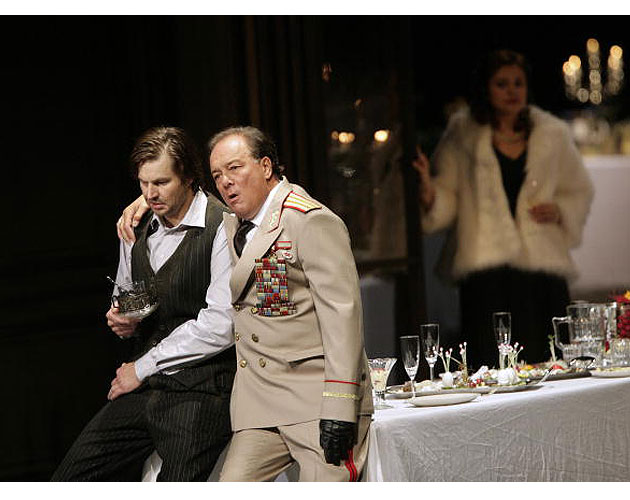 It’s not just his magnificent voice that makes Ferruccio Furlanetto one of the world’s most sought after basses, especially in the role of Don Quichotte, which he’ll sing with the Canadian Opera Company in May.

“I believe that it helps when you are mature,” says the suave Italian who turns 65 on May 16.

Maturity, he says, “brings another kind of approach.”

He explains that some years ago, he performed the title role of Mozart’s Don Giovanni with two different conductors, Herbert von Karajan and Riccardo Muti.

“Giovanni,” he says, “is about death. And the approach of each conductor was different.

“Muti was not yet 50 at the time and he was very aggressive, rejecting it. The approach of Karajan (who died in 1989 of a heart attack at the age of 81) was more interesting. It was a kind of acceptance.”

Both interpretations were the same story of Don Giovanni, he says, “but of the two, Karajan’s at that moment was really stunning.

“When you have longer life experience, you can filter amazing emotions.”

“Vocality through the decades takes advantage of experiences.”

But doesn’t aging take its toll on the physical aspect of vocality, especially after years of performing demanding opera scores?

“In my case,” responds Furlanetto, “it was a gift that I did, for 25 years, mostly Mozart.”

He says performing Mozart operas “is pure medicine for longevity” as a singer.

Furlanetto’s schedule is no less demanding as he turns 65.

His current season began in September at the Vienna State Opera with Verdi’s Don Carlo and Simon Boccanegra. He performed in seven different countries, including at La Scala in Milan, before arriving in Toronto for his first appearance in Canada.

His schedule also includes concert versions of operas and recitals which he finds especially challenging and enjoyable.

“You are there for one-and-half hours alone, painting with your voice colours and universal emotions. That would never happen even in the biggest roles that I’m singing. Recitals are a unique and wonderful opportunity for an artist.”

About concert versions of operas, he says, “It’s sometimes better than a production because some of the productions we are facing in Europe are so dreadful and demoralizing.”

He continues, “There is this new wave of directors coming from nowhere — for sure not from the world of music. What they do is something brutal, to astonish the audience. And for the young people, they don’t know what really great opera was in the past. They are receiving only what these kinds of directors today are presenting.”

For professional singers, he says, “this is a very depressing situation, to be constantly in the hands of amateurs. It doesn’t happen in any other profession.”

There are still some very fine opera directors, he acknowledges, but “very few, and they are gradually being considered out-of-fashion by a small but influential group of false intellectuals.”
Furlanetto says that he would consider directing, “maybe one day, but for the time being I am quite content with my own profession.”

He says he doesn’t do anything special to maintain his demanding schedule.

“The fundamental thing is to wake up in good shape.”

On the day of a performance, he’ll forego playing golf, which is his offstage passion.

He’ll warm up a little with vocal exercises in the early afternoon — “no more than 10 or 15 minutes, a bit longer when the role is more demanding.  Lunch, he says, “is basically carbohydrates: pasta, risotto.”

After the curtain goes down, he’ll have a light supper — “soup, not so much alcohol.”

“Sleep,” he says, “is very important in this profession.”