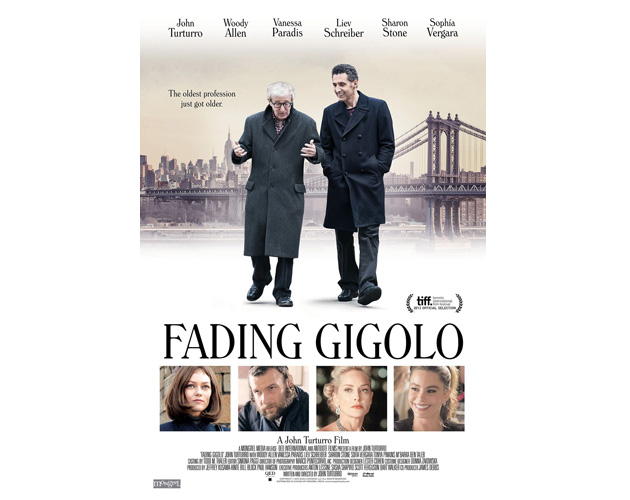 Stone: “Have you ever done (a ménage à trois)?”

Allen: “Yeah, 1977, during a blackout. Nobody could see anything but still, it was very pleasant.”

The Reality: Funny without getting too overly-sentimental, Fading Gigolo, written and directed by Turturro, boasts a definite Allen-esque quality in both tone and delivery that at times strays into “Woody Allen-lite” territory.

The story, to its credit, goes beyond the sexual to explore why Fioravante’s clients crave his intimacy, with Murray coaxing his meal ticket into “performing” when he suffers bouts of moral crisis. Everything goes according to plan until the sex literally comes to an abrupt stop during a ménage à trois with Murray’s dermatologist, Dr. Parker (Stone), and her friend Selima (Vergara), when its revealed that Fioravante is in love with the only one of his clients he never actually slept with: an extremely orthodox and sheltered Hasidic Jewish woman named Avigal (Paradis).

Through Avigal the story takes a romantic, and sometimes dangerous, turn, especially when her long-neglected admirer, Dovi (Schreiber), takes matters into his own hands. The tale, however, ends a little too neatly for a story centered on such an outlandish get-rich-quick prostitution scheme.

There’s nothing terribly wrong with the film — the acting is fine, the concept intriguing — but like a lover who falls asleep in the middle of a midnight romp it doesn’t exactly live up to expectations. True, Fading Gigolo is less about the actual sex and more an exploration of the emptiness we’ve all felt deep within, and how each person chooses to fill it. Unfortunately, though, by the time it’s over you may be left feeling slightly unfulfilled.

Theatres or rent it?: Rent

Can the kids/grandkids watch?: Probably not a good idea.