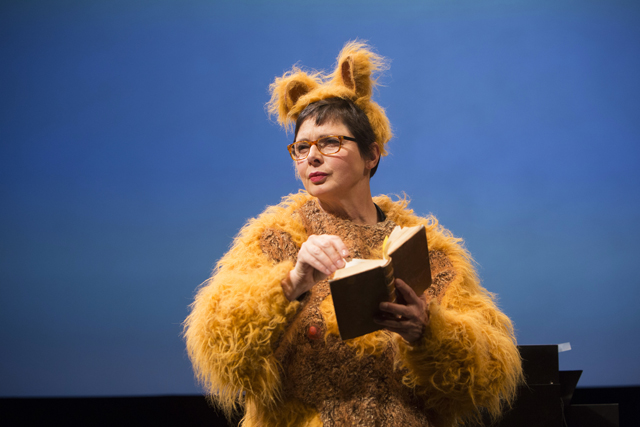 Well, it’s safe to say I’ll never look at a plate of escargot the same way again. Or a dragonfly. Or Flipper.

The show, which spawned (no pun intended) from a series of short films of the same name that aired on the Sundance Channel (as well as, in part, at the 2009 Toronto International Film Festival) features Rossellini, 61, in a professorial role, taking the stage wearing all-black with, it seems, only a lectern and a film screen at her disposal.

Rossellini literally explains the birds and the bees, along with the snails and the gorillas and the jellyfish and the elephant seals and the salmon and the barnacles…well, you get the idea.

But the show is much more than just a creative and humorous way of explaining animal mating rituals. Rossellini cleverly explores the meaning of bigger, deeper questions of everything from attractiveness to evolution to femininity.

The humour is definitely one of the major draws of this show — frankly, I never thought I’d see Rossellini in costume, simulating snail foreplay or demonstrating that, with dolphins, anything goes sexually — but you can’t discount its intelligence.