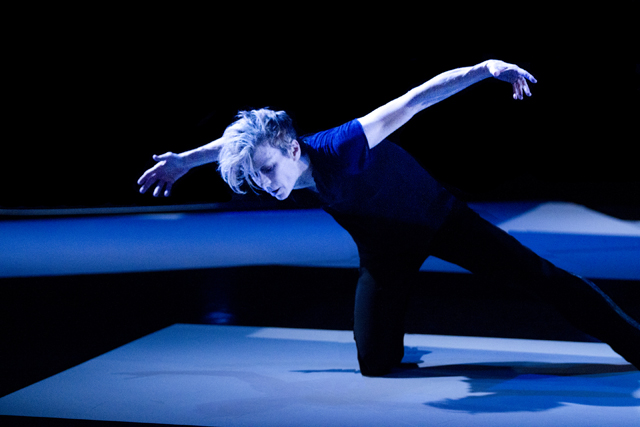 She’s danced across the stage with David Bowie, showcased her talents with the troupe La La La Human Steps, and wracked up her share of accolades over her 37-year career, but with her latest show, So Blue, contemporary dance superstar Louise Lecavalier tries her hand at a brand new challenge: choreography.

“There’s a freeness that I love,” the 55-year-old tells me when I ask about tackling choreography for the first time for her new show, in which she also stars. “I thought, I must give myself a chance like I give chances to choreographers. When I work with somebody I’m very open and not critical from the moment I accept … I try to bring what they give me to the furthest that I can. And so I try to do the same with myself now.”

Just days away from the Ontario debut of So Blue at Toronto’s Luminato Festival, I spoke with Lecavalier from her native Montreal about her debut as a choreographer, how she maintains her incredible energy onstage, and what a celebrated dancer taps her toes to on her days off.

MIKE CRISOLAGO: Tell me about making your debut as a choreographer with So Blue after dancing professionally for nearly four decades?

LOUISE LECAVALIER: I have no regrets about not trying (choreography) earlier because I’ve been very lucky to work with Édouard Lock for so many years … But when I left, I think I was too impressed by [how] his work was so refined and each movement served almost individually that I thought that I cannot do something like that. It’s too late for me to start that so I thought I better work with other choreographers who will give me steps, or some of the steps. And among that some people ask you, as a dancer, to be more creative in the sense of making the choreography. And then I realized I was able to do this, not in the way that Édouard does it but in a way that’s good enough for me to add material to the [work] of the other choreographers, and sometimes almost do all the movement myself.

And I had big pleasure doing that without thinking of having any title like I’m a choreographer now – a title is just a word you know. What I like is the job in the studio of making the dance. So it’s really another place that’s opened for me now and I really enjoy it.

MC: Are you more difficult on yourself as a choreographer than others are?

LL: I was difficult when I worked with Édouard – I was as demanding as he was so it was interesting for us to work together. We kept pushing ourselves. I was afraid that by myself I would have no end of pushing myself because I would never be satisfied. But that may be something that I felt when I was 20-something – now I’m maybe a little bit smarter in the sense that I don’t judge [everything] so badly. Just do things and maybe something will appear, and that was how I decided to approach making a piece for myself.

MC: The energy and stamina that you exhibit in this show is incredible. What kind of preparations do you do to ensure it stays at such a high level?

LL: Well, when I rehearse in the studio and improvise, and later on finally I had to choreograph it, it was more hours than what I do on stage. I was working in the studio for three-four hours and sometimes I was rehearsing for all [that time]. When I work I’m [untiring] in a way. I know also from all these years of dancing extreme shows with Édouard and working long and, at the beginning, extremely long hours in the studio, I know that energy brings energy. Also, maybe it’s because I have been working so hard for so many years that my body recuperates very fast in the studio so I don’t get tired and I work hard so in the end I have the shape it [takes] to do the show. Except for sure a show is more difficult because you have more stress. In the studio you have a kind of less stress. But on the stage it’s always more demanding to do a one-hour performance … but I kind of trust now that I’ve done it so many years, I don’t doubt at the beginning of the performance that I can do it.

MC: You’ve toured many cities with So Blue. What does it mean to you to bring the show to a festival like Luminato?

LL: Well, Luminato – I really love the name so I’m really happy to go into the festival. [Laughs] Also last year I saw a show there that I really enjoyed with Willem Dafoe [The Life and Death of Marina Ambramovic]. It was in a beautiful theatre [Bluma Appel Theatre]. Something’s always more exciting when you are part of a festival. I can’t explain exactly why. Maybe they create a build-up that’s not only for you or your show [but] it’s for other things also. So you’re part of an event and it’s nice not to be there by yourself.

MC: You’ve won numerous awards and accolades including, most recently, the Governor General’s Performing Arts Lifetime Achievement Award. You’ve noted, though, that you try not to think about it because it can become a burden. Can you elaborate on that?

LL: I’ve heard about it a lot in the last few months but really, everything has not become a burden because you must appreciate that people reward you for your work. But, you must also forget this very fast because … there’s a task everyday and what has been done the day before doesn’t count. So I appreciate the moment, I appreciate especially all the people who work around me, that believe in me, even the audience that likes the shows, likes what I’ve been doing. I feel people happy around me when I received that prize, or the [Grand Prix du Conseil des arts de Montreal] because they know or they see what I’ve put into my work. And they’re happy for the recognition. For me, I’m happy too, indeed, but I cannot live from that. It’s a beautiful moment, I take it for what it is.

MC: When you’re just dancing for fun, either at home or out with your friends, what type of music do you prefer to dance to?

LL: [Laughs] it depends how I want to relax. At home I’m not going to put very hard music because I’m with kids, I’m busy, I’m doing other things. But in the studio I put the music that I like to dance on for rehearsing. I like very upbeat music, intense music. I can’t dance so much on the too smooth music. I listen to it, I can like it, but it doesn’t make me move. I like to move [to] music that’s very percussive and a bit wild.

So Blue runs for three performances as part of Luminato from Friday, June 13-Sunday June 15 at the Fleck Dance Theatre. Click here for full event details and ticket information.