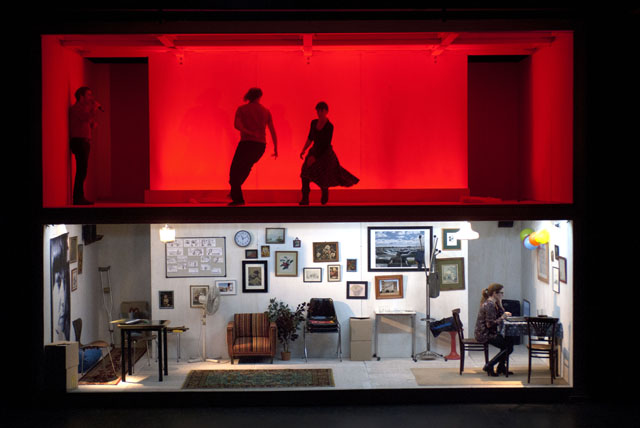 It feels more like reminiscing than reviewing when I tell you about Cineastas – a play by Argentine director and writer Mariano Pensotti that explores how the lives of four filmmakers impact their art, and vice versa – given that I attended the final performance of its Luminato run.

Still, despite the fact that by the time you get another chance to catch the show, this review will be a distant memory, I do want to note the show’s creative staging, intriguing sub-plots (most of which could have been a play unto themselves), fine acting, and overall inventiveness.

For those lucky enough to have attended its three Luminato showings, you know the play boasts roots in real-life interviews Pensotti conducted with various filmmakers in Buenos Aires and that the result is a captivating confluence of scandal, tragedy, humour, tenderness and self-discovery.

Set on a split-level stage where the lower half houses real-life events and the upper half the fictional film characters/plots they inspire, and the English subtitles (the play is in Spanish) appear in between, the play follows Gabriel (a “golden boy” of cinema who finds out he has a terminal illness), Mariela (an award-winning cult filmmaker in a dead end marriage who is engaged in an affair), Nadia (a young filmmaker whose first film, which was autobiographical, turns out to be a huge success) and Lucas (an impoverished filmmaker who steals money from his workplace, McDonald’s, to fund his upcoming anti-McDonald’s film).

From there we see how the lives of the four filmmakers play out – from hardships to heartbreak to more than a few laughs – and how the respective films they’re making change based on that.

If you caught it at Luminato, you were probably among those giving it a standing ovation at the end of its run. If you didn’t, keep your eyes peeled for Cineastas in the future. If and when it ever pops up again this side of Buenos Aires, don’t miss it a second time.