Luminato 2014 Interview: All The Sex I’ve Ever Had, The International Edition 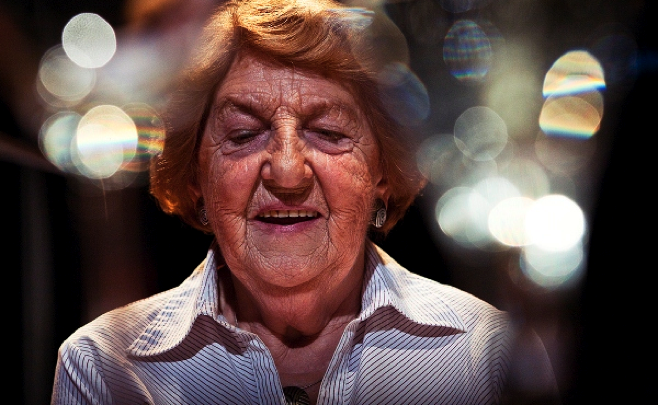 “She’s from Prague,” Darren O’Donnell tells me, referring to the woman in her 80s who graces the brochure for his upcoming Luminato show. “Every Thursday her boyfriend comes over and they have sex on her dining room table.”

Too much information? Not if you’re O’Donnell, 48, whose show, All the Sex I’ve Ever Had: The International Edition, which he co-directs as part of the performance group Mammalian Diving Reflex, features a panel of seniors from around the world discussing past [and present] sexual encounters.

“What I call sexuality, I think it’s very important to talk about it. To think that I’m 76 and boy, when certain people touch me, you feel something going through your body!” Toronto’s Bette Logan, 76, explains when discussing her participation in the show. “And people don’t realize that still happens. You can’t imagine that still happens, when you’re 30 or 35, that an old dame like that feels something.”

O’Donnell’s inspiration for the show, conceived in 2009, came when he spotted a community of active seniors in Germany that made him stop and think: “It was like, wait a second – there’s something about aging that I didn’t quite understand and now I’m seeing this thing differently so I wonder what it could be if we looked at more aspects of that.”

He’s quick to note, though, that this show isn’t about “performance.” Instead, it’s a real roster of international seniors telling real stories. “[It’s] the ancillary things to sexuality that end up being quite interesting,” he notes. “It’s those things, and … the consequences of your desires and the situations they get you in and the situations you want to be in because of your desires [that make up All the Sex I’ve Ever Had]. So this show is all that more so than anything else.”

In the interview on the following pages, I speak to Darren and Bette about the show, how Bette feels about taking part, some of the stories that have come up in past shows, and more.

MIKE CRISOLAGO: What was it like, Bette, coming from a generation where discussions of sex were off limits, to get up and talk about your sexual experiences?

BETTE LOGAN: When the idea was presented to me I was absolutely horrified and couldn’t imagine that I could possibly do it. Finally I said, “Okay, I’ll go and I’ll meet Darren and then I’ll make the decision.”

I found it very, very liberating and very easy…. People my age are uneasy because we see that the young people are horrified at the idea of older people having [sex]. In the shows in Germany and Switzerland after the performance, the number of young people who came up to us and expressed their extreme gratitude for telling us these things that they had never thought about before with respect to their parents or grandparents – they were very appreciative. I hope they’re going to be like that here.

MC: What are some of the biggest myths about sex that you’ve encountered when doing these shows?

DOD: Just the fact that it’s on [older] people’s minds. The teenage nervousness that occurs when you’re younger – puppy love – that still exists.

What’s common [among the attitudes in the different cities/countries they’ve performed] is that monogamy doesn’t exist. Monogamy is a myth. The way we understand a monogamous couple – that barely exists … There’s lots of infidelity and lots of so-called cheating. Monogamy – it’s not true. We need to sort of figure out a different way to think about relationships because that’s just a lie that we’re all telling each other for some reason.

MC: Bette, have you had reaction about your participation in the show from family and friends?

BL: They don’t have a clue. [Laughs] I think they wouldn’t like it if they came to see me in it. I think my grandson would probably come … It’s a consolation to have other people the same age as my kids who appreciate [the show] so much. I think, “Well, maybe that will transfer in some way.”

MC: Do you use a different name on stage?

BL: No. I’m more nervous to do [the show] here in Toronto because friends will come and everything. It’s different than doing it in front of strangers [Laughs] Oh well, what the hell.

DOD: That’s another thing that was a shift in my understanding – as people get older… [stuff] doesn’t matter anymore. That’s a nice thing about age, you just become more resilient.

BL: I just learned recently there are two lists to have: the “Bucket List” and the “F-ck It List.” Well, my F-ck It List is very long. [Laughs] The Bucket is quite short.

BL: For me it would be the explicit physical things. But for relationships and feelings and consequences of relationships … anything like that, that is related to an intimate sexual relationship, I would be okay with almost anything.

MC: With any of these shows you’ve done, have you ever had issues with former lovers of the participants taking issue with the discussion onstage?

DOD: Yeah, we’ve had some problems. [One woman’s] boyfriend didn’t like that she talked about her post-menopausal dry vagina and broke up with her because of it. There’s been that. There was a guy in Scotland who was in a band … so he was [sleeping with women] like crazy. We did a rough calculation that was about, probably, over the 20 years that he was doing that, from age 13-33, probably 2000 women … His daughters weren’t happy that he revealed that.

MC: And when Luminato is done you’re going to keep touring…

DOD: The interesting thing about it, [and] we witnessed this in Singapore, is the stories weren’t so edgy and crazy and fabulous like some of the stories we got elsewhere, but for whatever culture they’re in these people will inevitably be brave in that context and be seen by the audience as brave and be seen as revealing very personal things within that context.

MC: Bette, what would you say to people who might be a bit squeamish about the content, or how you partake, in this show?

All the Sex I’ve Ever Had runs from Thursday, June 12-Sunday, June 15 at Isabel Bader Theatre. Click here for show times and ticket info.