Luminato 2014 Review: All the Sex I’ve Ever Had 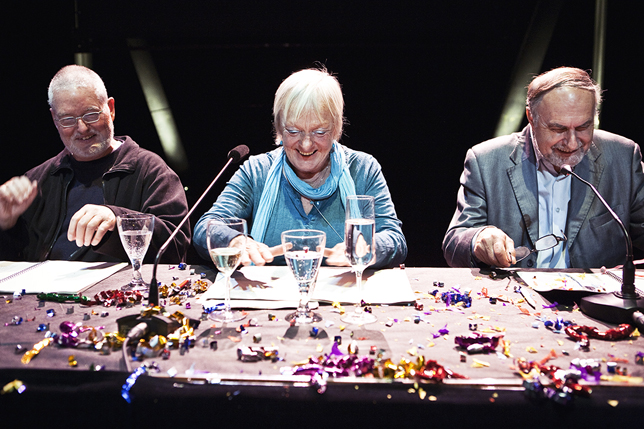 So, despite the fact that I can’t offer up any of the juicy details, I can tell you that this show is at times hilarious, and others heartbreaking, and is without question one of the brightest successes of this year’s Luminato Festival.

These are not actors. This is not a performance. These are real seniors telling real tales about sexual discoveries, agonies and ecstasies, curiosities and heartbreaks, abuses and traumas from childhood to present day.

For an interview with one of the participants, 76-year-old Bette, click here

It’s not inherently a lewd show – the panel isn’t here just to talk about the mechanics of sex. It’s about the experiences, what’s been learned, what’s been lost, old lovers and new flames, what’s been enjoyed and what they may wish they could forget. And there’s audience participation too; between the laughs and the gasps you may just find yourself confessing before a room of strangers just how many times you’ve made love in public (don’t worry if you’re shy – this isn’t mandatory).

But that’s the great thing about this show – after the panel has laid themselves emotionally bare on the stage, you come to realize that there is no judgment. There’s only acceptance. Followed by dancing. And in the end, you all feel like good friends because it seems you’ve known some of the people in the room forever. You know, because you’ve heard about all the sex they’ve ever had.

All the Sex I’ve Ever Had: The International Edition runs from Thursday, June 12-Sunday, June 15 at Isabel Bader Theatre. Click here for show times and ticket info.