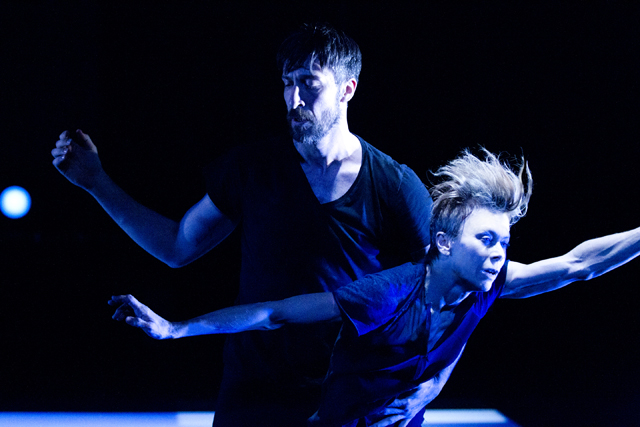 The following was overheard from audience members upon completion of the debut performance of Louise Lecavalier’s So Blue at Luminato Friday night:

If this show was indeed like religion, then the Canadian contemporary dance legend offered up an hour-long sermon, prophesying with every twisted limb and pulsating movement.

Much more than her Luminato debut, So Blue also marks Lecavalier’s debut as a choreographer. For me, as a newcomer to contemporary dance, I’m not one to pick apart every detail of the show. But I can tell you that the strength and preciseness of movement the 55-year-old exhibited proved at times awe-inspiring. She seemed a mass of pure energy, at times excited, vulnerable, passionate, sensual, and suffering.

It was almost non-stop from the start, her heavy breathing evident when the music temporarily died down. But she never slowed, whether navigating the stage, rolling on the ground with her dance partner or performing, literally, one of the most incredible headstands you will ever see in your life. It’s a testament to her intense training and years of dedication, from hours of extreme rehearsals in the studio to dancing alongside David Bowie.

“In the studio you have a kind of less stress. But on the stage it’s always more demanding to do a one-hour performance,” Lecavalier told me a few days before her Luminato debut. “But I kind of trust now that I’ve done it so many years, I don’t doubt at the beginning of the performance that I can do it.”

She was most definitely right.

So Blue runs until Sunday at the Fleck Dance Theatre. Click here for show times and ticket info.