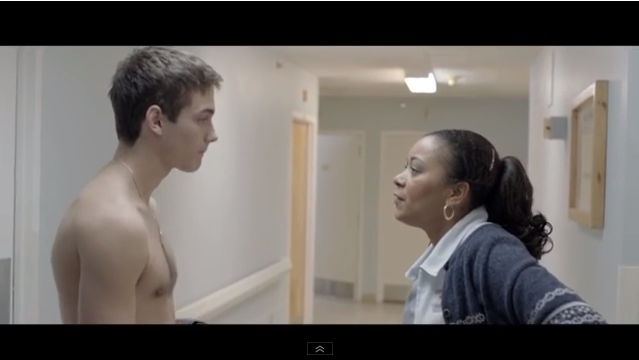 The Hype: Director/screenwriter Bruce LaBruce’s latest take on sexual taboos, Gerontophilia explores the homosexual relationship between a teenage boy working in an assisted care facility and an 82-year-old resident.

The Reality: Gerontophilia, which is the term for “the sexual preference for the elderly,” actually makes an exceptional concept for a love story. Unfortunately, forced acting and lazy writing watered down this film.

Lake (Lajoie), fresh out of high school, gets a job at an assisted living facility – fitting, as his girlfriend Desiree (Boland) calls him a saint for always helping others. Next thing you know, he’s stripping down and having sex with a resident, after fantasizing while giving another a sponge bath.

This sudden, and very risky leap from the occasional fantasy to romping with a resident  doesn’t fit with the kind, shy, responsible character we’re set up to believe Lake is. Eventually, he tells Desiree he’s worried that something’s wrong with him after she finds a collection of nude drawings he’s made of male residents.

Over time Lake gets to know Mr. Peabody (Borden), an 82-year-old man under heavy medication. We’re told he’s basically senile, but when Lake ditches his pills it turns out he’s completely fine. The two talk, play cards, and eventually strip down together in Mr. Peabody’s room. An uptight nurse catches them but, nonsensically, she merely scolds Lake in almost a “boys will be boys” way.  Rumours spread about Lake – even his mom hears about it – but for some reason the hospital’s reaction is to sedate Mr. Peabody as opposed to imposing any punishment on (or simply firing) Lake.

From there you have a convoluted plot where Desiree helps Lake sneak Mr. Peabody out of the residence (right past the nurse, alone, in an empty hallway, who apparently just didn’t notice them). The two then embark on a road trip to show Mr. Peabody the Pacific Ocean one more time.

All of a sudden Lake turns out to be a jealous boyfriend, he and Mr. Peabody start planning for their lives together, and then you reach the ending, which is telegraphed a mile away (as well, the final scene literally had some audience members laughing due to the cheese-factor).

Aside from a story that shows little to no major character development or reasoning, Lajoie is the only one who really shows off any acting chops, Borden — an award-winning Canadian stage veteran — is surprisingly wooden, Boland’s character’s stock response is to chatter incessantly, to the point of laughable cliché, about the revolutionary women she idolizes, and Lake’s mom (Thibault) is your standard “drunk, irresponsible mom” character.

In short, the subject matter is much more thought-provoking than the film turned out to be.

The Verdict: It’s as if the script was on whatever drugs they were force-feeding Mr. Peabody to sedate him.

Can the grandkids watch?: Only if they’re old enough to handle the nudity and sexuality.