Popcorn Picks: And So It Goes 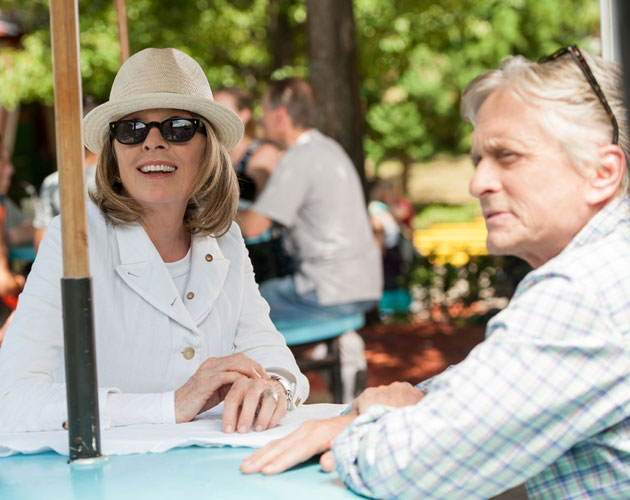 Diane Keaton: “I’m 65!”
Michael Douglas: “I’ve sold houses older than you, and in much worse condition…It was a compliment.”

The Hype: It’s been a rough few years for curmudgeonly realtor Oren Little (Douglas). His wife passed away, his bank account took a hit in the 2007/2008 economic crash, and now he’s forced to sell the family home and move into a small apartment complex if he has any hope of fulfilling his retirement dream of escaping to the peace and quiet of Vermont.

But when Little’s estranged, jail-bound son shows up to ask him to take in the granddaughter (Jerins) he didn’t know he had, Little’s life is turned even further on its head.

Not a fan of kids, or dogs, or anyone really, Little counts on the help of his kind-hearted neighbour Leah (Keaton) in caring for his granddaughter while the couple sparks an unlikely romance of their own.

The Reality: Reports from the special Zoomer screening of this film noted there was “never a quiet moment” among the audience in attendance, a packed theatre for which Douglas and Keaton could do no wrong.

Douglas, as always, embodies his character – in this case, the grumpiest of grandpas you could hope to meet. This is, after all, a man who shoots a stray pooch in the behind with a paintball gun, and for whom the sound of the neighbourhood children laughing is akin to nails on a chalkboard. Keaton, meanwhile, is her sweet, funny, loveable self who also, as Douglas exclaimed to me, is “one hell of a singer, and a good kisser.”

For fans at the Zoomer screening, the film’s light-hearted jabs at millenials and the romance between Keaton and Douglas won them over. And lets not forget 10-year-old Sterling Jerins, who more than holds her own with two of Hollywood’s most talented heavyweights as co-stars. For me, one of the best scenes is when Little gets serious, revealing the secret agony he lived with in an emotional defense of his capability for compassion.

And So It Goes is a sweet film about later-in-life love and real world difficulties that can arise with age, including illness, loss, and, Douglas notes, questions of “Do you, at the twilight of your life, have to change your lifestyle financially, and does that embitter you? And how do you overcome that or keep that spark alive?”

If Oren Little can try and make a go of it, there’s hope for the rest of us.

Can the grandkids watch?: Sure, though they may not appreciate the jokes at their generation’s expense.