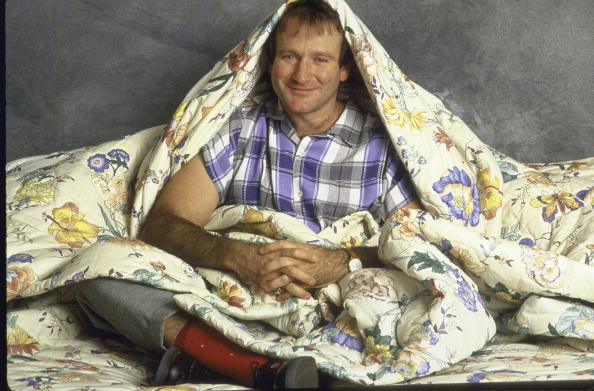 There’s a gravitas to the notion that Robin Williams passed away that weighs heavy, regardless of whether you remember him from his early stand-up or met him as the Genie in Aladdin. It’s a rare entertainer who boasts the talent to make people laugh and pause for thought with equal sincerity, and Williams used that gift to transcend genres and mediums, touching generations of fans over a near 40-year career.

In honour of his life and work, we look back on our favourite Robin Williams moments.

Stand up and Improv

For many fans, Robin Williams was at his best on an empty stage, left to his own devices.

From his early stand-up at the famed Comedy Store to Live at the MET to his last ever special, 2009’s Weapons of Self-Destruction, Williams intertwined common comedy foils such as politics and sex with subjects that held deep personal resonance, from the trappings of fame to substance abuse, with an honesty and candor that endeared him to audiences.

Beginning in 1986 Williams teamed with two other comedy titans – Whoopi Goldberg and Billy Crystal – for Comedy Relief, and in 2000 stretched his improvisational muscles on the hit series Whose Line Is It Anyway?

But it was those nights on stage, with just a microphone and a captive audience, where Williams seemed right at home.

In 1977, fresh from Julliard, Williams landed his first TV gig as a cast member on The Richard Pryor Show. Following that, a guest appearance as the nasal-voiced, jumpsuit-clad Mork, a “nutso from outer space” who proved just wacky enough to showcase Williams’ trademark improvisational skills, earned him his big career break.

Though Williams appeared on countless television shows over the years, including starring in The Crazy Ones as recently as this year, it was his turn as Mork on Happy Days, followed by the hit sitcom Mork and Mindy in 1978 that proved the true launching point for Williams’ mainstream success.

The Tonight Show with Johnny Carson

Johnny Carson could famously make or break a comedian’s career with a nod of approval and invite over to his desk after a set on The Tonight Show. But to be invited to be one of Johnny’s last guests, on the day before the King of Late Night stepped down? That’s a true television honour.

“In this business there are comedians, there are comics, and once in a while, rarely, somebody rises above and supersedes that and becomes a comic persona unto themselves. I never cease to be amazed at the versatility and wonderful work that Robin Williams does,” Johnny said in his guest introduction, inviting Williams on stage to chat, improvise, and bring the host to tears of laughter one last time.

Williams was never a stranger to late night, but from his first appearance with Johnny in 1981 to his last in 1992, he always found himself in rare form on The Tonight Show.

Robin Williams was born for comedy and, while an untamed improviser at heart, there were numerous times when he allowed his rare talent to be harnessed for the big screen.

From Good Morning, Vietnam (“Remember the people who brought you Korea? That’s right, the U.S. Army. If it’s being done correctly, here or abroad, it’s probably not being done by the Army.”) to Mrs. Doubtfire (“He was quite fond of the drink. It was the drink that killed him…He was hit by a Guinness truck.”) to The Birdcage (“It’s like riding a psychotic horse toward a burning stable.”), it’s impossible to pick a favoruite. But one thing we can agree on – everyone has one.

Perhaps one of the most endearing aspects of Robin Williams’ legacy is his ability to turn off his comedic side and bring a sense of sincerity and genuine insight to dramatic roles. Sometimes he played the hero. Sometimes a sinister villain – though deep down it was hard to hate him, no matter how good the script.

Among his greatest dramatic hits, Dead Poets Society (1989) demonstrated that he was more than just an extremely talented jokester. A year later, Awakenings paired Williams with Robert De Niro in one of his most touching roles. And 1997’s Good Will Hunting won Williams his only Academy Award.

In hindsight, one of his lines from that award-winning performance offers particular resonance: “You’ll have bad times, but it’ll always wake you up to the good stuff you weren’t paying attention to.”

We don’t immediately associate him with kids’ films, but for a large chunk of his career Williams dedicated himself to making movies the whole family could enjoy together. From playing a grown-up Peter Pan in Hook (1991) to his big blue Genie in Aladdin (1992), the adventurer in Jumanji (1995) to the more recent Happy Feet and Night at the Museum franchises, Williams’ ability to transcend generational gaps and find acceptance from audiences of all ages is one of the reasons his passing hits so hard.

Families will have one more chance to enjoy a new Robin Williams film together when Night at the Museum 3 hits theatres later this year.

Robin Williams won his share of awards and accolades over the years, but it was his only Oscar win, at the 70th Academy Awards in 1998, that resonates the most with fans. Maybe it’s because he’d been nominated three times previously and never won. Maybe it’s the irony of the fact that, when the brilliant funnyman finally did win, it was for a dramatic role. Or perhaps because his good friend Billy Crystal met him on stage with an embrace.

We like to think it’s because, perhaps for the first time in his life, the legendary comedian was left flustered, emotional, and speechless.