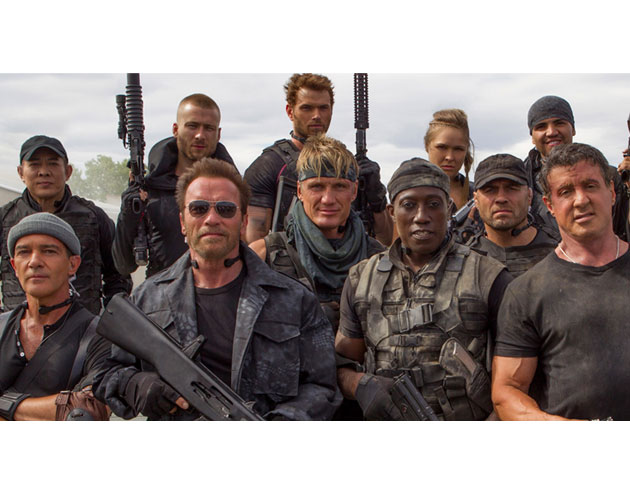 The Hype: Former Expendable turned evil arms dealer Conrad Stonebanks (Gibson) isn’t as dead as Expendables leader Barney Ross (Stallone) thought. And not only is he alive, but he wants to destroy Barney and the rest of his crew. With his old partners, and some new blood, Ross and Co. set out to stop Stonebanks once and for all.

The Reality: There’s a scene in the film where one of the new, younger Expendables admonishes Barney’s plan of attack for taking down Stonebanks’ – which amounts to kicking the door down and barging in guns a-blazing. “That may have worked in the 1980s,” the kid quips, before outlining his plan to use their hi-tech computers to override Stonebanks’ security system and allow them to sneak in the back door.

Essentially, that’s what this film boils down to: cheesy one-liners that would have passed the test three decades ago but come off as lame and dated here. Perhaps that’s due, in part, to the fact that Stallone himself co-wrote the film.

The other theme is that the current crop of older heroes is just that – old – and Stallone feels the need to bring in some new, young butt-kickers. So he recruits some, but when they’re promptly captured by Stonebanks, the old guys have to ride in and, together with the kids, save the day.

It’ a nice thought if the film left you caring about seeing any of the younger Expendables in action again, which it doesn’t. The lone stand-out who you’d pay to see in a sequel is Ronda Rousey – the current Ultimate Fighting Championship’s Bantamweight Champion – due to both her stand-out performance and because, in the back of your head, you know that in real life she could leave all of the men in the film laying.

And as for the established stars – I enjoy that they can still carry an action franchise, but between the lame one-liners and the image of the likes of Harrison Ford piloting a helicopter like it’s the Millennium Falcon after spending most of the film as a suit, this is getting silly.

Don’t get me wrong – Mel Gibson is fantastic as a cocky, heartless villain, and one of the true highlights of the film. But when you have 10 Expendables taking on an entire army – a literal army, with tanks and everything who, by that looks of it, were never taught how to aim – the film loses it’s luster. Add to that the soundtrack, which includes Neil Young’s “Old Man” during a scene where Stallone stares down his younger Expendables counterpart, and you’ve got a recipe for two hours of eye-rolling.

I’m not saying this movie is terrible. There are some cool action sequences and performances from Rousey, Banderas, Grammer, and Gibson are indeed highlights.

And it’s not even that Stallone and Co. aren’t believable – in fact, they all come off as legitimate action heroes. It’s just that, if they make another one, I hope they keep Stallone away from the writing table.

Theatres or rent it?: If you need to see folks get blown up on the big screen, do it. Otherwise, it’s a renter.

Can the grandkids watch?: At your own risk.