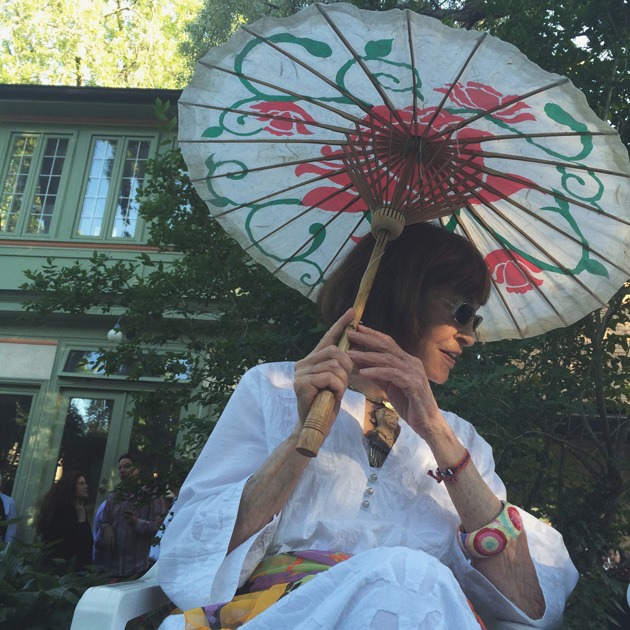 Last Chance! The work of Gloria Vanderbilt on display in Toronto until Thursday. Here, Nolan Bryant speaks with the iconic artist and fashion designer.

For the last four years during the month of June, Toronto has quietly greeted an icon. Gloria Vanderbilt is many things: heiress, writer, painter, entrepreneur, designer and style arbiter, she is also a last vestige to New York’s Golden Age.

Speaking with Vanderbilt is like a journey into the past, her soft Mid-Atlantic accent and use of words like marvelous and enchanting are verbal souvenirs from another time.

Her link to Toronto however is current and creative. Vanderbilt makes the trip from New York, where she lives and works to present the $15,000 award for the Carter V. Cooper Short Fiction Competition, one of Canada’s largest literary prizes now in its fourth year.

The idea for an award was presented to Vanderbilt in 2009 through Exile Editions publisher Barry Callahan (son of legendary novelist Morley Callaghan), the award would honor Gloria’s son (and older brother to CNN’s Anderson Cooper), a promising editor, avid reader and writer from the time he was as small child, who was just 23 when he died in 1988.

In the preface to this year’s CVC Short Fiction Anthology (Exile Editions), a series which features the work of the twelve finalists, Gloria writes that although her son’s voice was silenced, the intent of the prize is to “help other writers find their voice, and help them touch others lives with the mystery and magic of the written word.”

Her creative calling doesn’t end with the writing; on display until Thursday at Toronto’s Spoke Club is Vanderbilt’s latest, a show presented by the De Luca Gallery, featuring the melancholic washes and wistful pastels for which Gloria Vanderbilt, the artist has become known. Gloria’s commute to the Upper East Side studio where she works is a quick one, “I live on the floor above, ten steps and I’m there” she told me of the space, previously occupied by husband Wyatt Cooper, a screenwriter and author, “I decorated the fireplace and on it is written “Be kind for everyone you meet is fighting a great battle,” she tells me of the inspired space.

Tucked in a corner, one of the smaller works titled Do you love me? caught my eye; the next evening at a dinner given in Gloria’s honor at the Rosedale home of Barry Callahan, Gloria explained that the work was based on friend Carol Matthau (who was married to William Saroyan, and later Walter Matthau), “she spoke in this kind of whispering voice, and she was very, very insecure and from the day I met her, she would say “Do you love me?” and finally it drove me crazy and I said “Yes! I love you! don’t keep asking because it makes me feel like you don’t know I love you,” so I did two paintings very much like her and on it I wrote Do you love me, with a question mark.”

I am curious about the friends and collaborators of Gloria’s that have fascinated me; I want to ask about Truman Capote and his mid-century “swans”, the set of illustrious society women she is often associated with, I want to ask about the sittings with Horst, Avedon, Beaton and Rawlings under the direction of fashion editors Diana Vreeland, Edna Woolman Chase and Carmel Snow and the nights at El-Morocco on the zebra print banquettes with people like Rita Hayworth.

But I resist because Gloria isn’t one to hark on the past; at age 90, her gaze is fixed firmly on the future and the creative work that drives her curiosity, I remind myself that maybe some tales are better left untold.

The work of Gloria Vanderbilt is on at The Spoke Club 600 King Street West, Until August 28. For more information on the Carter V. Cooper Short Fiction prize visit http://www.theexilewriters.com/. In Canada, Ms. Vanderbilt’s art is represented by http://www.delucafineart.com/