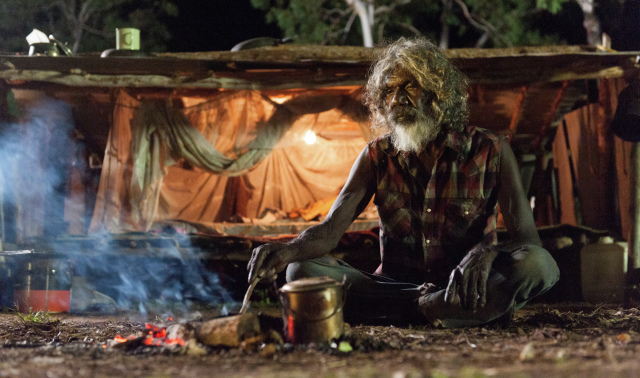 His hair grey and his body weak, Charlie (Gulpilil) decides to venture into the forests of northern Australia, leaving everything behind to escape to a life reminiscent of his Aboriginal ancestors. Country: Australia (with subtitles)

Choice Quote: “I danced for the Queen of England when they opened (the Sydney Opera House). I bet you never did that.” – Charlie, to police officer who gave him a “recreational” hunting license.

The Hype: His hair grey and his body weak, Charlie (Gulpilil) decides to venture into the forests of northern Australia, leaving everything behind to escape to a life reminiscent of his Aboriginal ancestors. It isn’t easy – food is scarce and the police thwart almost every effort Charlie makes to live as his forefathers did. Eventually Charlie reaches a breaking point, embarking on a physical and personal journey to escape the racism, sickness, and inequality that permeate Aboriginal life.

See It At TIFF?: Absolutely. I know it’s only day one, but Charlie’s Country is my film to beat at this year’s TIFF. Gulpilil is brilliant – no surprise really, considering his career includes multiple critically-acclaimed performances helmed by director de Heer. As Charlie, Gulpilil is heartbreakingly human – at times hilarious, tragic, brave, and broken. Based partly on the actor’s life, Charlie’s Country confronts the character’s struggles, and that of the entire Aboriginal community, with the same intensity as Charlie and his friend taking down a buffalo on the hunt.

Ageless and brave, this film will make you laugh one moment and cringe the next – a remarkable cinematic experience that deserves the Cannes best actor award that Gulpilil won this year, and a whole lot more. Can you say “Best Foreign Film Oscar”?

The Verdict: Add this film to your TIFF screening list.