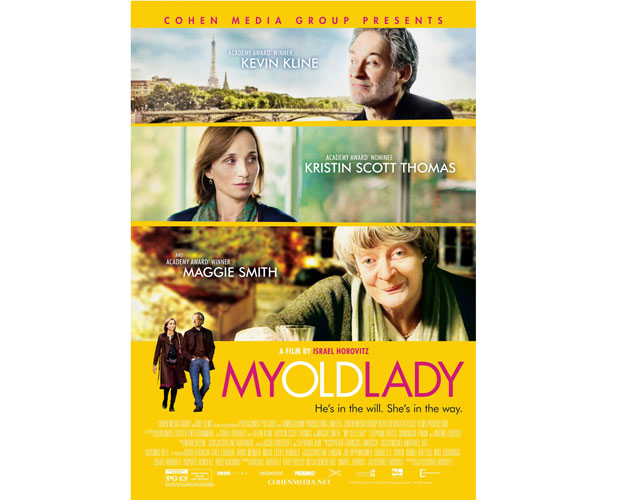 Rather than a skeleton in his closet, Mathias Gold’s father has a 92-year-old lady named Mathilde in his living room…

Choice Quote: “Take a walk by the Seine…don’t jump in. You’d probably fail to drown yourself and just end up with a dreadful cold.”

The Hype: Rather than a skeleton in his closet, Mathias Gold’s father has a 92-year-old lady named Mathilde (Smith) in his living room.

When the father passes away, Gold (Kline), a down-on-his-luck American, inherits his spacious Parisian apartment. When he visits, however, he finds Mathilde, the former owner, and her daughter Chloé (Scott Thomas) living there. To Mathias’ dismay, the apartment falls under a French law called a “viager,” which means not only is Mathilde allowed to live there until she dies, but Mathias, the owner, is obligated to pay her 2,400 euros each month.

Broke, desperate, and teetering on a relapse of the alcoholism that helped end his three marriages, Mathias attempts to sell the apartment. However, the more he learns about his father’s past with Mathilde, the more he realizes that selling the apartment is the least of his worries.

See It At TIFF?: My Old Lady places family histories under a microscope, examining how the ripples of one generation’s actions can rock the boat of the next.

Kline is pitch-perfect as the sad-sack Mathias, and the chemistry between he and Smith proves as inherent as it comes – whether during a comic exchange or an impassioned clash. Scott Thomas is also wonderful as Mathilde’s headstrong and protective daughter, especially as her own skeletons begin to reveal themselves.

The film, written and directed by 75-year-old celebrated playwright Israel Horovitz, wisely allows the characters to work out their tattered histories in their own time, in turn giving the three principal players the opportunity to breathe and make the most of their parts. Witty throughout, serious when it needs to be, and mostly avoiding cinematic convention, My Old Lady is an engaging tale of destruction, redemption and healing, all told with a cheeky attitude to boot.

The Verdict: Not to be missed.