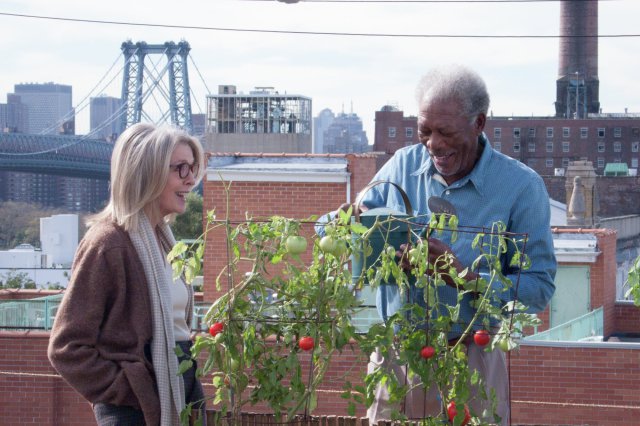 A meditation on aging and finding a place to call home – in this case, a million-dollar Brooklyn apartment the couple bought decades before anyone ever believed that anything in Brooklyn could be worth a million dollars.

Choice Quote: “Who would have thought that the whole of my life’s work would be worth less than the room it was painted in?” – Alex (Freeman)

The Hype: Aging couple Ruth (Keaton) and Alex (Freeman) contemplate selling the Brooklyn apartment they’ve called home since they married four decades earlier. Aided by Ruth’s real-estate agent niece Lily (Nixon), the couple holds an open house over the same weekend that a suspected terrorist is on the loose in their neighbourhood.

See It or Skip It?: With such a great cast, and a celebrated director in Loncraine, it’s even more disappointing to note how dull this film turned out.

On the surface it’s a meditation on aging and finding a place to call home – in this case, a million-dollar Brooklyn apartment the couple bought decades before anyone ever believed that anything in Brooklyn could be worth a million dollars. The film addresses gentrification, the necessity to adapt with age (the building has no elevator, which poses a problem for the couple as they get older), and, through Alex, an artist, assessing the worth of one’s life’s work.

But the final product is about as dramatic as watching an actual open house take place. Ruth and Alex have minor tiffs, but nothing they can’t smile and shrug off. Even they don’t really know why they’re moving – a point they repeatedly re-enforce, leaving the audience to wonder why we should really care either – and it seems every little conflict they encounter, luckily, works out.

Perhaps raising the stakes would have helped: say, the couple has to move because the neighbourhood is now too expensive to live in. Then the tension would mount and we’d have a reason for investing in this selling/buying scenario. But when the characters can quash the main conflict by simply opting out of it, it’s difficult to get invested. And when the rest of the film skims the surface of the themes it’s built on, you start to wonder about the point of telling this story at all.

The Verdict: The fact that it’s built around two older characters who are vibrant, likeable, and independent is a plus. But really, by the end, I was more moved by the sadness I felt in learning that, unless I win the lottery, I’ll never live in a Brooklyn apartment with a beautiful view, than by the film itself.