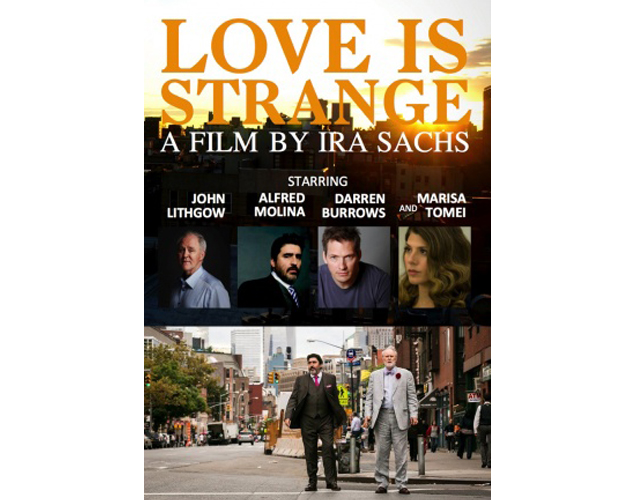 Lithgow and Molina make a beautiful couple: when they embrace you feel it, when they fight you hear the echoes of four decades worth of gripes, and when they’re separated the longing that connects them hangs heavy over the rest of the film…

Choice Quote: “Love does not delight in injustice, but rejoices in truth.” – St. Paul to the Corinthians

The Hype: Benjamin (Lithgow) and George (Molina), a couple for 39 years, finally marry, though the honeymoon is cut short when George is subsequently fired from his job teaching music at an elementary school. As a result, the couple is forced to give up their New York apartment, each moving in with separate family/friends until they can find an affordable home to call their own.

The Reality: This is a funny, touching, realistic portrait of a couple struggling to find their footing at a point in life when they thought they were ready to settle in for good. The beauty of it, really, is that this film could almost be completely recast with actors 30 years younger and barely any of the main plot points would need to change.

That’s because this, refreshingly, doesn’t harp on the idea that it’s an “older” couple but, simply, a couple. So yes, while there are some issues related to aging – Benjamin’s heart issues for one – this film doesn’t turn the effects of aging into a gauntlet the main characters have to run while also working to solve the main conflict.

This is a mostly healthy, active, vibrant older pairing, and Lithgow and Molina really do make a beautiful couple. When they embrace you feel it, when they fight you can almost hear the echoes of nearly four decades worth of gripes, and when they’re separated the longing that connects them hangs heavy over the rest of the film. Kudos to director Sachs for allowing them to grow and express the relationship onscreen.

Once separated, the tensions rise for both men. Benjamin moves in with his nephew Elliot (Burrows), his novelist wife Kate (Tomei) and their teenage son Joey (Tahan) – a situation that threatens to boil over when Kate can’t get any work done with Benjamin chatting all day and Joey sacrificing his personal space by bunking with Uncle Ben.

In the end, it’s a tribute to the couple on their wedding day that proves true: “You guys, your love, your dedication to each other, are an example to be followed.” That love alone sustains them through the sunny days and the storms. And in the end, isn’t that the best kind of love story?

Love Is Strange opens in select theatres in Montreal, Vancouver, and Toronto on Sept. 19. More cities and theatres to follow.