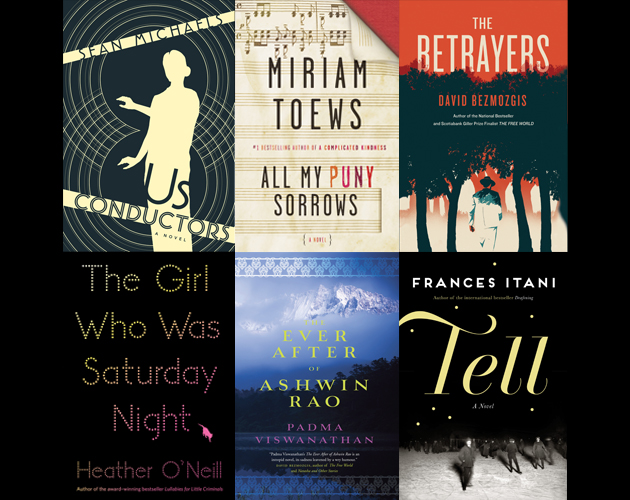 The jury has reached a verdict, revealing the shortlist for one of Canada’s most prestigious literary honours: the ScotiaBank Giller Prize.

The three-person jury – an international selection of scribes including Shauna Singh Baldwin (Canada), Justin Baldwin (Britain), and Francine Prose, (the United States) – made the announcement this morning following a champagne toast to the written word at a packed Soho House in downtown Toronto.

The shortlist, culled from more than 160 submissions, is below, including excerpts from the jury comments made at the unveiling this morning. For the complete jury comments and author information, visit the ScotiaBank Giller Prize 2014 Shortlist webpage:

From the jury: “David Bezmozgis has a dazzling talent, is the possessor of that rarest of skills – the ability to create fiction which is intensely serious but which also vividly encompasses the absurdity and comedy of life.”

From the jury: “Itani inhabits many voices with ease, pathos and humour. Her choice of details expertly builds our understanding of her characters’ times, foibles and moral choices, and she connects them in a hugely satisfying ending.”

From the jury: “(Michaels) succeeds at one of the hardest things a writer can do: he makes music seem to sing from the pages of a novel.”

The Girl Who Was Saturday Night (HarperCollins)

From the jury: “Even as it gives us a cast of vibrant, funny, tragic, sharply drawn characters, O’Neill broadens her focus to portray the political climate in Quebec at the time of the 1995 referendum and to give us a sense of why, in the words of her narrator, the daughter of an iconic Québécois singer, there is something “distinct,” something “weird and special” about us.”

All My Puny Sorrows (Alfred A. Knopf Canada)

From the jury: “Her book, based around the bond between two sisters, one of whom is bent on suicide, is a deep and affecting portrait of love, loyalty and reckoning…Do not be misled; this is art masquerading as light fiction.”

The Ever After of Ashwin Rao (HarperCollins)

From the jury: “This often droll, fiercely-intelligent novel with its cat’s-cradle of a plot challenges the twin deadly lures of religious fundamentalism and racism, revealing the learning and unlearning at the core of the immigrant experience.”