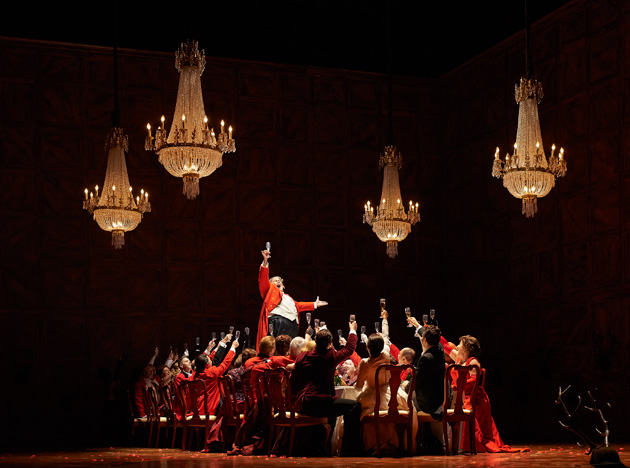 Canadian baritone Gerald Finley, who is Falstaff in the Canadian Opera Company’s production at Toronto’s Four Seasons Centre on stage now through Nov. 1, has climbed to the very top of the opera world.

The 54-year old singer also climbed Mount Kilimanjaro just weeks before arriving in Toronto for rehearsals. The climb with his two sons was undertaken to raise money for Help Musicians UK.

“Feeling a mix of eager anticipation + disbelief!” he tweeted before flying to Tanzania.

Eager anticipation is what opera fans were feeling for the 2014/15 COC season that opened on a high note with Falstaff.

Reviews have described the COC production, directed by Robert Carsen, as “stunning” and “a comic masterpiece.”

Set in 1950s London, it also played to great acclaim at Covent Garden, La Scala and the Met.

The director of the COC’s Madama Butterfly, which opens Friday and plays through Oct. 31, hasn’t scaled any mountains lately but 86-year old Brian Macdonald is revered as a Canadian icon. An original member of the National Ballet and a renowned choreographer who’s directed all over the world, he lives in Stratford.

“The Canadian temperament brought me back,” he says.

What he’s learned in his 60-plus years career is “how to do the most with the least.”

It’s the music, he says, that keeps him engaged, inspired and challenged.

“It’s just lying there on the page,” he explains, “and then somebody sings and suddenly it takes space and has a life — and you have to guide that life.”

Macdonald’s Butterfly was first produced for the COC in 1990 and has been mounted many times since. It’s a favorite with audiences — and with the director who is content with what he achieved 24 years ago.

“Sometimes when you do a production,” he says, “you just throw your blood into it from the beginning and there’s no need to renew it.”

Macdonald looks back on his career with pleasure, even recalling the details of a production of Damn Yankees he directed at Winnipeg’s Rainbow Stage in 1960 when this writer worked there as stage brat.

But he looks ahead, too. “I’d love to do Aida or Rosenkavalier.”