Popcorn Picks: The Hundred-Year-Old Man Who Climbed Out the Window and Disappeared 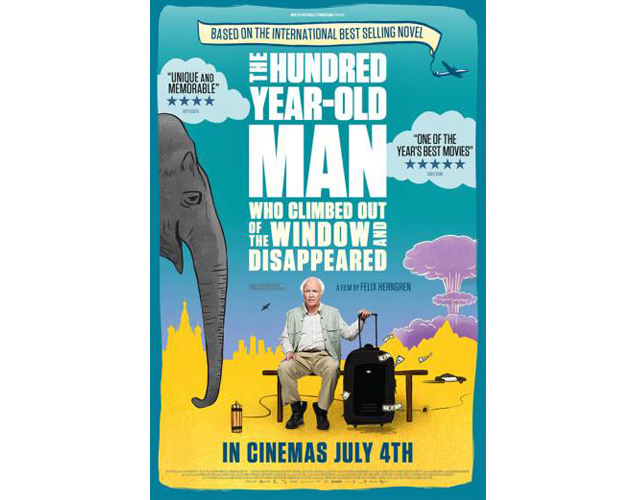 Genre: Comedy (in Swedish, with subtitles)

Choice Quote: “Making grand plans is easy when you’re locked up, or in a jam. But it does no good, because life is what it is, and it does what it does.”

The Hype: A quirky, clever adventure that begins on Allan Karlsson’s (Gustafsson) 100th birthday, when the freshly minted centenarian climbs out of his retirement residence window and embarks on a road trip across rural Sweden. Based on the hit novel of the same name by Swedish writer Jonas Jonasson.

The Reality: A creative mash-up of road trip follies and unintended detours through history that would impress Forrest Gump, this is one of the most enjoyable films I’ve seen in a long time. And that’s including last month’s Toronto International Film Festival.

I think what I loved most about this film is that it doesn’t take itself too seriously. It’s not necessarily trying to impart some grand lesson about life or aging – though if you pick one out of it then all the better for you. It’s simply a unique story told with wit and intelligence (and a little silliness) that genuinely keeps the viewer captivated to the very end.

We meet Karlsson, a kind, mild-mannered man, on his 100th birthday, though through a series of self-narrated flashbacks he fills in his personal history. It starts with his childhood, where he discovered his love for explosives and blowing things up. Orphaned at an early age, a young Karlsson is institutionalized before heading out on his own, travelling around the world and stumbling upon major historical events where his explosives expertise comes in handy – from the Spanish Civil War to the invention of the hydrogen bomb. As a result he becomes chummy with some of history’s most famous faces – from Francisco Franco to Joseph Stalin to Harry S. Truman (on the very day he gets the news he’s been promoted from Vice-President to President of the United States). The funniest encounter, however, comes when does time in the Gulag with Albert Einstein’s dimwitted twin brother, Herbert (a hilarious David Shackleton).

Meanwhile, in the modern day, Karlsson’s climbed out of his retirement home window and catches a bus to the middle-of-nowhere Swedish town Byringe – its remoteness punctuated by this hilarious Google Map image of the real town. A twist of fate finds Karlsson in possession of a stranger’s suitcase, which happens to contain 50 million Swedish krona (currency) – not a bad nest egg.

From there Karlsson is tailed by the biker gang desperate to track down their suitcase full of cash as well as the investigator hired by the retirement home to find him. Along the way he makes some kindhearted friends (Wiklander, Wiberg, and Skäringer) while dodging repeated attempts on his life.

The acting throughout is great, the jokes hit their mark, and the story well-paced. Still, the beauty of the film is that Karlsson rarely, in his life, ever sets out for a specific destination. And the places he ends up are often remote and devoid of any attraction or excitement. Yet something about Karlsson invites both, wherever he goes, whether he wants it or not. And through it all he just keeps moving forward, content that, whatever road he takes, life will simply work it all out.

The Verdict: A wonderfully imaginative film with a (mostly) loveable core of characters that offers a laugh for every one of Karlsson’s 100 years.

The Hundred-Year-Old Man Who Climbed Out the Window and Disappeared opens in Toronto, Ottawa, and Vancouver on Oct. 10. Other cities to follow.