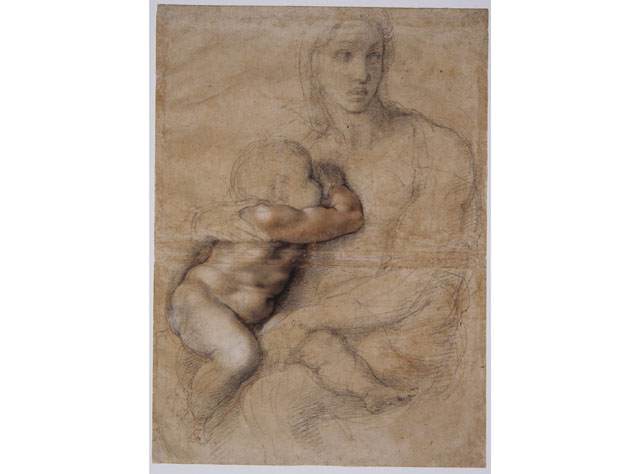 “A narrative of Michelangelo’s life, as well as a rare and personal glimpse into the creative process of history’s greatest artist.”

Imagine if William Shakespeare took a break from his quill to paint The Last Supper, sculpt the Venus de Milo and help design Westminster Abbey. It’s a crude analogy, sure, but it offers an idea of the scope of creative genius we’re dealing with when talking about Michelangelo Buonarroti.

Michelangelo, along with Leonard da Vinci, proved the living embodiment of the term “Renaissance Man.” To scratch the surface of his resume is to reveal a master of multiple disciplines – fresco (the Sistine Chapel ceiling), sculpture (the statue of both David and The Pietà) and architecture (St. Peter’s Basilica). And that’s without taking into account the majority of his works, including the sketches and plans for everything from grandiose tombs to halls and libraries and even fortifications, many of which never came to fruition.

It’s easy, then, to understand why David Wistow, interpretive planner at the Art Gallery of Ontario (AGO), thought of Michelangelo as “too perfect, too god-like, too grandiose” when tasked, alongside the gallery’s European Art curator Lloyd DeWitt, with assembling the AGO’s upcoming exhibition Michelangelo: Quest for Genius.

“Rule No. 1 for Lloyd and me really has been to transform this god into a human being,” Wistow said of the exhibit, which features 30 of the artist’s drawings and sketches. “And secondly, there is this myth that the creative process is effortless, and what these drawings demonstrate is purely that, of course, that’s anything but true.”

The exhibition is like sneaking into the master’s workshop and shuffling through his designs while he’s gone for lunch. Straight from the Casa Buonarroti museum in Florence, Italy, 30 figurative and architectural drawings line the gallery walls. From the Madonna and Child to Cleopatra to building facades and male nude studies, these are the pages Michelangelo held in his hand – often sketched on both sides to save paper and most left unfinished, illustrating not just his progress but, just as fascinating, his process.

Of course, this is more of a detail-oriented presentation than a sweeping retrospective of the works of a great artist. There’s no sitting back and taking in of a large oil canvas while contemplating the artist’s meaning. This is the nitty-gritty – small sheets of paper mounted on the wall, where you have to get up close to appreciate the fragile lines and figures that, in a way, feels somewhat reminiscent of the Royal Ontario Museum’s Dead Sea Scrolls exhibit a few years back.

It’s an exhibit that also requires some imagination, as most of the illustrations are unfinished. So with each fragment of a limb, or a torso, or a building or setting, one can only imagine what the finished product might have been. In some cases, the AGO provides the completed image for comparison and, in others, the gallery’s technological partners at LG Electronics do your imagination’s work for you – offering large TV screens with 3-D digital renderings of what some of the artist’s architectural plans might have looked like had they been built.

My one gripe about the exhibition, in fact, is the LG aspect, touted proudly at the unveiling but somewhat underwhelming when encountered during your walk through the space, as most of the screens are tucked away in corners with the digital renderings looking more like your computer’s default screensaver than a detailed architectural plan come to life.

I didn’t spend much time on the screens but instead checked out the massive Rodin sculptures that accompany the exhibit, included because of Michelangelo’s influence on the French artist’s work.

Ultimately, the exhibition isn’t as sprawling as the AGO’s recent major offerings, but it doesn’t need to be, standing as both a narrative of Michelangelo’s life as well as a rare and personal glimpse into the creative process of history’s greatest artist.

Michelangelo: Quest for Genius runs from Oct. 18, 2014, to Jan. 11, 2015, at the Art Gallery of Ontario. For more information on the exhibit and related events, click here.