Between the Lines … Andrea Martin on Family, Anxiety and Dating a Man 29 Years Younger 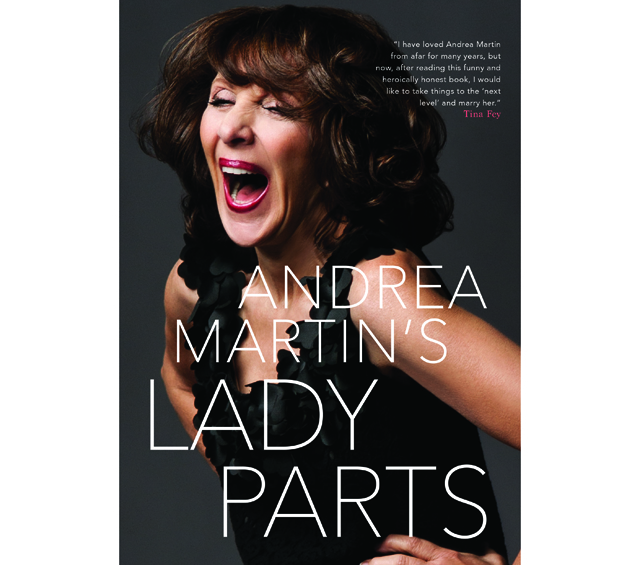 Between the Lines features quick cuts from conversations with artists, writers and other cultural figures.

She’s “Canada’s favourite illegitimate child” – Andrea Martin, legendary comedienne, Tony-winning Broadway star and, as of last month, successful memoirist. The 67-year-old spoke with Zoomer magazine for the November 2014 issue about her new autobiography, Lady Parts. In the excerpt from the interview below, Martin talks with Mike Crisolago about her relationship with a man nearly three decades her junior, the support she had of her sons when publishing her very personal memoir, and her hopes for the years ahead.

MIKE CRISOLAGO: You write in your book about a loving relationship you began at age 57, with an actor named Terry who was 28. Do you find that your priorities, when looking for love, change as you get older?

ANDREA MARTIN: I honestly feel that it’s different for everyone although I do speak to women who say there’s a certain group of women who need to be in relationships. They need to have a sexual outlet and that’s a priority for them. It isn’t a priority for me. I don’t think it’s that I’m worried about intimacy. But I guess I had other priorities and, at the end of the day, I’m exhausted. I have a full career and I have a lot of friends and I’m involved with my sons and writing this book and doing plays. I don’t know – it feels like my days are full. So I guess meeting someone has been low on my list of priorities.

When I met Terry, not for one minute was I even in the mindset of maybe this guy’s flirting with me. It never crossed my mind. But I think I was just so taken with his genuine persona – his authenticity. He was just such a kind, decent, real person. There was nothing manipulative about him. He didn’t want anything from me. I think it was just pure attraction, chemistry. It wasn’t even that it was so sexual – it was just a connection that we made that was so unlikely because of our age difference. And I’m not going to lie – it was certainly difficult when it was over. But I look at it as kind of a gift in my life and I’m not looking to create another one like that. Maybe it was just one moment in time in my life. And that’s [how] I look at it – with enormous gratitude. And maybe something will happen like that again, just when you least expect it. A surprise. But honestly, I think people search for love in different ways and everybody’s different – they’re either in long term relationships, they’ve had long marriages, maybe they’re lonely and they’re joining a club so they can meet people, or maybe they’re just happy being single. I think everyone’s different.

MC: Your memoir is very brave and honest and, at times, quite personal. How did your two [adult] sons react when they read it?

AM: Oh my boys, just, so dear, I waited until the last minute to give them the book and they read it on the way from L.A. to New York on the plane and I was really scared. And, [Tearing up] they were so grateful, I think, that I was as real as I was. And I think it gave them permission to be as real as they are. That’s a big thing.

…They’re very supportive. They’re adorable though – they said, “Gee mom, that first part ended so sad I was so happy to read the second part when you were talking about your writing.” So yeah, I think they were relieved that the next 200 pages weren’t going to be that tragic. Yeah, what they said to me is, “You finish your book, mom, and you really get a sense of who you are.”

MC: If you were to write a follow-up to your memoir in 10 years, and it picked up where Lady Parts leaves off, what do you hope the next few chapters would contain?

AM: I’d hope that the fear and anxiety that I’ve lived with for so much of my life will have dissipated. I guess what I would want to write is that my concern for the past and my concern for the future no longer matter. That honestly, even though I’ve given lip service to staying in the moment, really 10 years from now I’m really living that. Because actually, I think that’s the only thing that really matters. It’s just how to discipline yourself to do it.