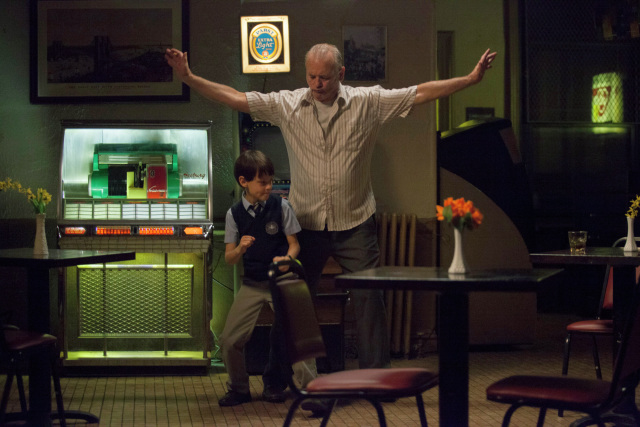 Choice Quote: “I’m showing him how the world works. You work, you get paid, you drink.” – Vincent

The Hype: The crotchety, alcoholic, foul-mouthed, perennially cash-strapped Vincent (Murray) becomes an unlikely after school babysitter for young Oliver (Lieberher), who moves in next door with single mom Maggie (McCarthy). Vincent takes Oliver to the racetrack to gamble, the bar to drink, and to the garage to teach him to defend himself against schoolyard bullies. But beneath the rough exterior, Vincent has a distinguished and touching history that Oliver slowly uncovers.

The Reality: Is it worth checking out? Absolutely. Why? Bill Murray. Need we say more? The legendary actor/comedian is almost always a safe bet (lets conveniently forget Hyde Park on Hudson, which stunk up TIFF in 2012). Here he’s close to his cranky best – bordering on downright unlikeable – though where he truly shines is in the film’s most poignant moments, when Vincent’s guard is down and we get a deeper glimpse into his world.

Melissa McCarthy is also wonderful, while Lieberher shines opposite Murray and on his own, in what should prove a career-launching performance. Naomi Watts is a strange choice as Daka, the pregnant Russian stripper, but she pulls it off (no pun intended).

The Verdict: This isn’t my favourite Bill Murray film. It’s a bit formulaic – there are echoes of Jack Nicholson (who was rumoured for this role) in As Good As It Gets, and even Michael Douglas in this year’s And So It Goes, with the grumpy old grouch learning to be nice. But Murray makes Vincent his own – a mix of Nicholson and Archie Bunker with, at times, Christopher Walken’s accent. Meanwhile, the supporting cast is superb and the film’s genuinely touching moments make the difference. Like I said – it’s rare that you’ll go wrong with a Bill Murray film.

St. Vincent opens today in Toronto, and across Canada on October 24.