Between the Lines…with Molly Johnson 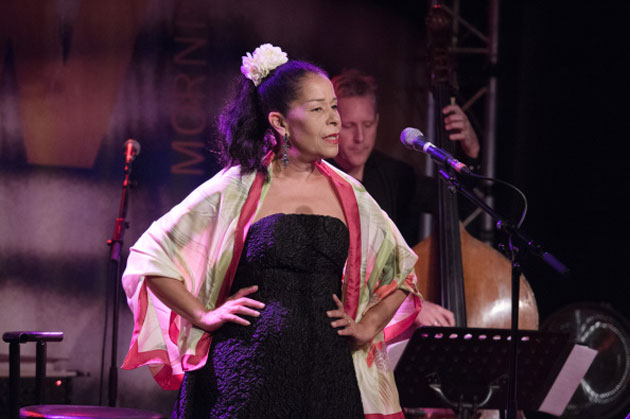 Between the Lines features quick cuts from conversations with artists, writers, and other cultural figures.

In this installment, Zoomer’s Mike Crisolago talks with award-winning Canadian jazz singer Molly Johnson about family, raising kids while on the road, and donating proceeds from her latest album to at-risk youth.

Growing up with musical parents…

MOLLY JOHNSON: My parents were big lovers of jazz music, and 70s pop as well. So there was a lot of that at the house … The first record my dad bought me was Miles Davis’ The Birth of the Cool. He had great musical taste. We had a lot of fun driving around in the car, just listening to AM top Toronto radio, and he’d dial up those Buffalo stations and get that R&B stuff.

Raising her children and maintaining her career at the same time…

MJ: I really took 10 years off to raise my boys. I said no to a multitude of things. [She and her band] would go to France on a Thursday night, a seven o’clock flight, arrive on Friday morning, do press all day, do a show Friday night, wake up Saturday morning in Paris, either train or plane somewhere else in France and do a show Saturday night, and then Sunday morning wake up, fly to Charles DeGaulle [airport] and fly home. And be home Sunday night in time to get an enormous amount of school laundry organized and re-set for Monday morning. I did that for 10 years.

On celebrities hiring nannies to raise their kids…

MJ: I don’t care what anybody says. You could have banks of nannies – mom’s freaking mom and I’ll fight that one until the end. I had a part-time nanny. She didn’t cook for my children. She didn’t put my children to bed. She took them to the park so I could talk on the phone and try and hold a career together for three hours a day … It doesn’t matter if you’re a bank teller or Celine Dion – and I know her, and I know her children, and believe you me, she’s cleaned up her share of vomit happily. Blessed to have that opportunity. I’m not kidding you. That girl’s awesome.

Why it’s important that the proceeds of her new Billie Holiday tribute album, Because of Billie, go to the Boys and Girls Clubs of America and Canada…

MJ: That’s a really great charity. And they’re everywhere, in every neighbourhood. So wherever I tour, I can actually fundraise for that Boys and Girls Club in your neighbourhood. And I like the work they do. As a parent, I understand the importance of after school programs. Most parents work, and most parents are unavailable between four and seven, when all the stuff happens to our kids…And I truly believe that Billie [Holiday being] in jail at 14 for prostitution with her mother speaks clearly that there’s a person who didn’t have a childhood. So I chose a children’s charity and I chose one that addresses kids at risk.

Johnson’s sixth studio album, Because of Billie, is available now. For more with Johnson talking about her connection to Holiday, pick up the November 2014 issue of Zoomer magazine.