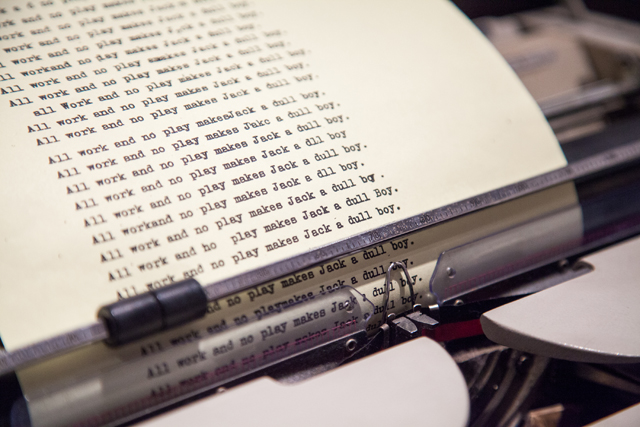 Authenticity wrapped in theatrical flair is the order of the day here, making this perhaps the closest thing to actually appearing in a Stanley Kubrick film

WHAT: Stanley Kubrick: The Exhibition

WHERE: Spread out over 7,000 square feet at the TIFF Bell Lightbox in downtown Toronto – the space’s largest exhibit to date.

FIRST IMPRESSIONS: Hearing the faint echoes of 2001: A Space Odyssey’s epic score in the distance as you enter the first room, you sense something impressive lies ahead.

KEEP AN EYE OUT FOR: The multitude of film artefacts on display, such as the actual star child from 2001: A Space Odyssey and costumes worn by Sir Laurence Olivier in Spartacus and Malcolm McDowell in A Clockwork Orange, decades-old letters demanding censorship of Kubrick’s work, as well as original scripts, photos, Kubrick’s personal notebooks, and clapboards (more on this below).

AVOID: Touching the monolith in the 2001: A Space Odyssey room. As Jesse Wente, TIFF Bell Lightbox’s Director of Film Programmes, noted, “You can touch it. I cannot speak to what will happen to you if you do.”

THE EXPERIENCE: Authenticity wrapped in theatrical flair is the order of the day here, making this perhaps the closest thing to actually appearing in a Stanley Kubrick film.

It’s set up as a series of rooms ordered chronologically, beginning with the director’s early efforts (Fear and Desire and Killer’s Kiss), through his most famous work (Dr. Strangelove, 2001, A Clockwork Orange, The Shining, etc.) and eventually his final films (Full Metal Jacket and Eyes Wide Shut).

Each room is splashed with unique colours, designs, props, and artefacts, all of which reflect the film it represents. For example, the Shining room boasts a wall-to-wall recreation of the Overlook Hotel’s famous carpet, as well as the doors to room 237. The dresses worn by the creepy twins in the film are on display, and if you look closely you can still see the blood stains. The 2001: A Space Odyssey area, meanwhile, features a bright white space room and a recreation of the monolith from the film. And, as you might expect, the Clockwork Orange room isn’t exactly PG.

Once you’ve wound through the rooms, Perpetual Check, an adjacent viewing area specific to the Toronto exhibit, weaves together a collection of clips from all of Kubrick’s films to explore various themes in the director’s work.

After that make sure you head to the fourth floor of the Lightbox to a massive room containing a plethora of Kubrick film posters, cameras and lenses (including the famed “Candlelight Lens” that allowed the director to film the entirety of the 18th century period piece Barry Lyndon by candlelight), and photography.

There’s also a tribute to Kubrick’s “unrealized works,” from the futuristic A.I. to the Holocaust film Aryan Papers to his Napoleon epic, including storyboards, Kubrick’s personal “Napoleon Reference Library” (a massive bookcase filled with Napoleon-related tomes), and the entire index card catalogue Kubrick commissioned from a group of grad students, which is said to chronicle every day of the French leader’s life.

SPOILER ALERT: Click the video below for a quick video tour of the various Kubrick exhibit rooms:

FINAL THOUGHTS: Not only is this a strikingly authentic tribute to the director’s work, but it also stands as a testimony to the unique creative mind and perfectionist personality that have come to define Stanley Kubrick’s legacy. Much of the director’s work is so recognizable that touring the maze of themed rooms proves a thrill even for a Kubrick novice.

Stanley Kubrick: The Exhibition makes its only Canadian stop at the TIFF Bell Lightbox from October 31, 2014-January 25, 2015. For more information, click here.