Frances McDormand is Olive Kitteredge and So Much More 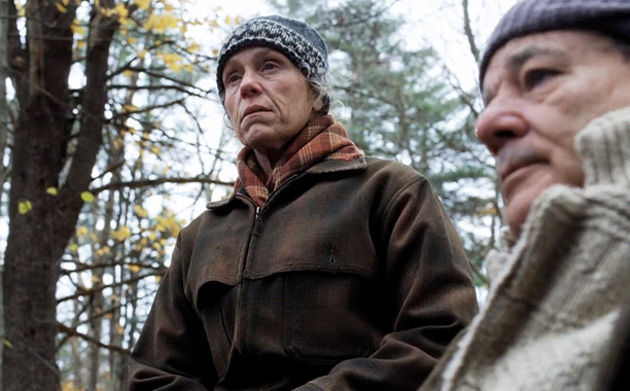 When I was very much younger, the movie star I most wanted to be like was Leslie Caron.

My best friend wanted to wake up one morning looking like Audrey Hepburn.

Today the movie star I want to be most like is Frances McDormand.

In what she describes as “a subversive act”, she acquired the rights to one of my favorite books, the Pulitzer Prize-winning Olive Kitteredge, and produced it as a two part miniseries for HBO.

She also plays the title role — an aging, dowdy deliciously acerbic Maine teacher whose life with her mild, dull pharmacist husband is as routine as the tides, replete with the detritus of a long marriage, hope and joy dashed against the rocks of necessary concessions.

The project, which exists only because of McDormand’s determination, “marks many new chapters for her,” wrote Frank Bruni in the New York Times.

It’s her first real foray into television; the first time she’s undertaken a project of this scope from initiating it to promoting it with interviews after a decade of avoiding them while her son was growing up.

“It’s also a statement of intent,” Bruni observed. “She’s no longer going to wait for other people to bring her good parts. And she won’t emulate other actresses in her age range — she’s 57 — and cast herself in the most flattering light possible.”

Describing what she’s doing as “subversive” is accurate, he suggests, because it’s a showcase for “older actors playing older people with late-in-life worries. ‘Olive’ is (McDormand’s) answer to an industry and a society that she finds perverse in their fixation on youth.”

In a wonderful wide-ranging conversation, McDormand declared, “We are on red alert when it comes to how we are perceiving ourselves as a species.

“There’s no desire to be an adult. Adulthood is not a goal. It’s not seen as a gift. Something happened culturally: No one is supposed to age past 45 — sartorially, cosmetically, attitudinally. Everybody dresses like a teenager. Everybody dyes their hair. Everybody is concerned about a smooth face.”

She’s talking about other people. Her own hair, Bruni writes, is a “chaos of dark and white patches and untamed tufts pointing every which way. She’d done nothing to disguise the lines around her mouth and eyes, and her brow furrowed readily and completely. She showed me.”

Remarkably for a Hollywood power couple with several Academy Awards between them, McDormand has been married to the Joel half of the Coen brothers for 30 years.

The pregnant sheriff she played in Fargo was probably their best known collaboration although they would say it’s their son Pedro, whom they adopted from Paraguay.

“I have not mutated myself in any way,” she said. “Joel and I have this conversation a lot. He literally has to stop me physically from saying something to people — to friends who’ve had work. I’m so full of fear and rage about what they’ve done.”

Probably that fear and rage is mostly directed at the culture that made it seem necessary.

McDormand was never just another pretty face and likely because she was so much more than that, the loss of smooth skin and youthful contours doesn’t feel like a deficit to her. In fact, it’s just the opposite, observed the Times writer.

“Looking old, she said, should be a boast about experiences accrued and insights acquired, a triumphant signal ‘that you are someone who, beneath that white hair, has a card catalog of valuable information.’”

Olive Kitteredge airs on HBO Canada as a two-night minseries on Nov. 2 and 3 at 9.m. Watch the trailer here.