Popcorn Picks: The Theory of Everything 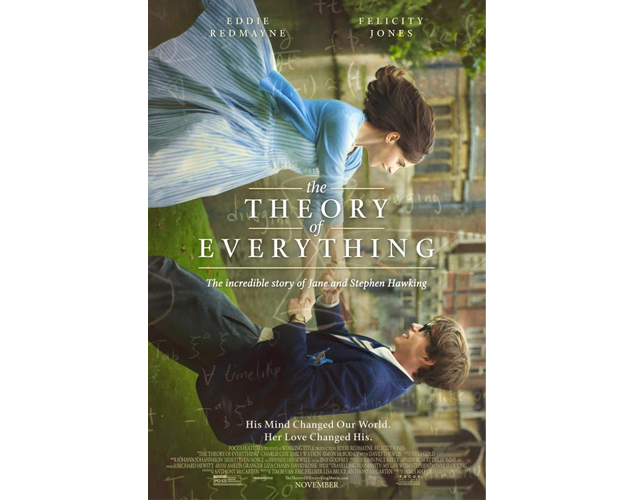 Choice Quote: “Your brain isn’t affected. Your thoughts won’t change. It’s just, eventually, no one will know what they are.”

The Hype: A dramatic biopic, peppered with comedy, covering the early life, career, and personal challenges of acclaimed theoretical physicist and author Stephen Hawking. Based on ex-wife Jane Hawking’s memoir Travelling to Infinity: My Life with Stephen.

The Good: Consider, for a moment, that Eddie Redmayne plays Stephen Hawking, who suffers from a motor neuron disease similar to ALS (which gained much needed attention from people pouring buckets of ice water over their heads this summer). The challenge of portraying the disease’s progression is difficult enough for an actor. Now consider that a major motion picture like The Theory of Everything is filmed out of sequence, meaning, theoretically, Redmayne could be playing a physically-afflicted Hawking one day, a younger, healthier Hawking the next, and then have to jump back into the middle of the illness for the following shoot.

“The real problem with making a film is of course you don’t shoot chronologically,” Redmayne told Entertainment Weekly. “So it was about having to really try and chart his physical deterioration [so] you can jump into it day-to-day, whilst at the same time keeping this spark and wit and humor that he has.”

This fact makes Redmayne’s heart-wrenchingly brilliant portrayal of Hawking even more remarkable, calling to mind Robert DeNiro’s Oscar-nominated turn as a catatonic patient in Awakenings. As a side note, expect to see the words “Oscar-nominated” preceding Redmayne’s name in the next few months.

The film itself is a compelling drama splashed with elements of comedy. It’s less about the actual science of Hawking’s discoveries and more about a brilliant academic whose body begins to fail him as his academic work is poised to soar, a man who’s told he has two years to live who goes on to publish a history of time.

Felicity Jones as Hawking’s wife Jane – the literary, Church of England-devoted antithesis to the atheist Hawking – shines as she balances her devotion to her husband’s care while at the same time being slowly crushed by the weight of mounting responsibility and celebrity. A scene in which Jane is interrupted while dressing Hawking to tend to their crying newborn underscores the heft of her duties.

The cast, overall, does a fine job, and director Marsh ensures the film moves at a decent pace while mostly keeping the needless sentimentality in check.

The Bad: Speaking of needless sentimentality, there are a few points (a kiss under the stars, another kiss in the glowing light of stained glass windows) that reverberate with Hollywood schmaltziness. There are plot points, too, that could have used some fleshing out (I won’t go too in depth, as they include spoilers) but nothing so bad that will take you out of the film.

The Ugly: No ugly, but it is worth noting that many critics have rebuked the film for focusing more on Hawking’s personal life, or his feelings about of the existence of God, than his actual scientific work. There’s some merit to the latter point, but overall those who criticize the film in this manner are missing the point.

First, it’s based on a memoir by Jane Hawking’s first wife, which is your first clue that it isn’t going to delve into the nitty-gritty of theoretical physics. But more importantly, the point of the film is to tell the story of a young man with a crushing disease and the loving woman who gave him the will to live and move forward with his work. The work itself is a large component of the story but not the main one. And if you can accept that, you’ll enjoy it that much more.

The Verdict: Eddie Redmayne’s performance is essentially only a few DNA strands short of completely becoming Stephen Hawking. The science in the film adds up to little more than the introduction to a theoretical physics textbook, but that doesn’t matter. You’ll be engrossed by the seemingly impossible life story of a man who, five decades ago, was given only two years to live.

The Theory of Everything opens in theatres on Nov.7.