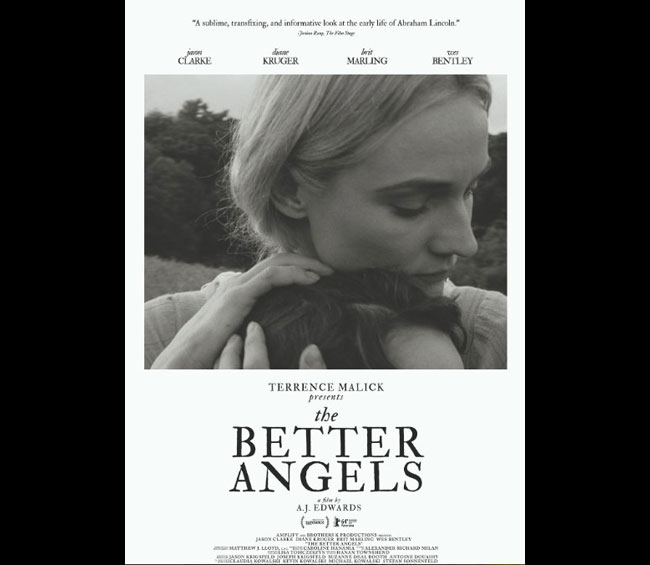 The Better Angels is less about bowing down to a beloved future leader and more about highlighting the struggles that shaped him.

Directed by: A. J. Edwards

Choice Quote: “He won’t stay in these woods forever…He’ll make his mark.”

The Hype: Three years in the childhood of Abraham Lincoln, who moves with his family from Kentucky to a cabin in the unforgiving Indiana wilderness, filmed in crisp black and white.

The Reality: I’ve got to be honest, Abe: the film is beautifully shot, and the monochrome treatment adds to the mood, but it’s slow to unfold. That said, the performances – particularly, (Lincoln) Denney, his dad Tom (Clarke) and stepmother Sarah (Kruger) – are solid, and director Edwards (a protégé of Terrance Malick) manages, through his Malick-esque camerawork, to create a portrait of the future president that’s at times sentimental, haunting, and brutally real.

Set in the backwoods of Indiana, a young Abe endures a harsh childhood living in a small cabin and working the land alongside an overbearing father. His doting mother, Nancy (Marling), nurtures his intelligence and wants to send him off to school but, when tragedy strikes, it starts to look like Abe will never make it out of the woods.

Of course, we all know he eventually does, and America owes Abe’s stepmother, Sarah Lincoln, a partial debt of gratitude for that. She moves in with her own three children and immediately transforms the Lincoln homestead, including finally convincing Abe’s dad to send him off to school.

There are moments that play on Lincoln’s future a little too obviously – the scene, for example, when a number of slaves in chains are marched past Abe in the forest – The Better Angels is less about bowing down to a beloved future leader and more about highlighting the struggles that shaped him.

As mentioned before, the film can be slow at times. There’s a lot of chopping wood and plowing fields and silent brooding around the family property. But what it lacks in flare it makes up for with the fact that it’s a very different Abraham Lincoln than you’ve seen on film before – the same man Daniel Day-Lewis won his historic third Oscar for portraying in the 2012 film Lincoln. But for every presidential note Day-Lewis managed to hit perfectly, Braydon Denney plays an unrecognizable Lincoln. There’s no tall hat, no beard, no “four score and seven years ago.” There’s just a kid teaching himself to read in the woods – a reminder that even one of history’s greatest leaders was an innocent child in trying to find his own path once upon a time.

The Verdict: While the pace and style aren’t for everyone, it’s about as unique and refreshing a portrait of Lincoln as you’ve ever seen.

The Better Angels opens at the Carleton Cinemas in Toronto today, with further Canadian releases to follow.