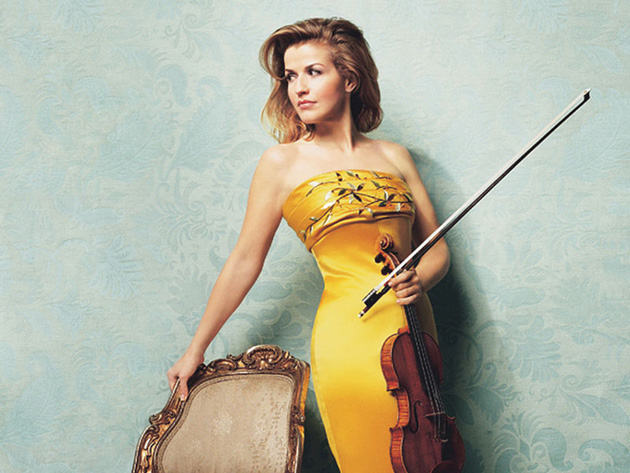 Winter came early this year in Toronto, but its snowy beauty couldn’t compare with the intensity and energy of the first movement of the Winter concerto of Antonio Vivaldi’s Four Seasons that swirled through Classical 96.3FM’s concert hall at the ZoomerPlex on Nov. 21. The capacity audience, most of them contest winners for the station’s new Radio Concert Hall Series, listened enthralled as the internationally renowned violinist Anne-Sophie Mutter and her acclaimed Mutter Virtuosi presented four works (including the last movement of Vivaldi’s Summer) that they would play in concert at Roy Thomson Hall in the evening.

Asked about her violin, the Lord Dunn-Raven Stradivarius crafted in 1710, she noted how difficult it is for up-and-coming violinists to have access to suitable but very expensive instruments. That awareness drove her to create the Anne-Sophie Mutter Foundation, to provide young talents with instruments, scholarships and career-creating connections to important soloists and conductors.

In German, the word mutter means “mother” and, in fact, Mutter has been a single mom to Richard and Arabella since their father died in 1995, when they were very young. But her motherly concern also extends to her scholarship string players. The 13 members of the Mutter Virtuosi – current and former ASM Foundation students of many nationalities – smiled when she confessed she’s closer to some of the women who had left home at a young age to pursue musical studies. All of the foundation’s students are chosen for talent, commitment and passion. “This makes them outstanding,” she added.

These qualities were undisputed as Mutter and Roman Patkoló, double bass, played Ringtone Variations, a playful contemporary piece by American composer Sebastian Currier that was commissioned by Mutter’s foundation.

Before Mutter and the Mutter Virtuosi concluded the intimate concert with Mendelssohn’s Octet for Strings in E flat major, op. 20, Mutter spoke admiringly of the composer’s championing of society, including musical education for children of all nationalities and his belief that music is for everyone. “Musicians should bring music and hope and sunshine and beauty,” Mutter said with passion. “It’s a philosophy. Being a musician, being an artist, you should be … somebody who brings light into the dark because music is such a wonderful gift from God, but also something to share with others… It is about the us, and not about the I.”

It’s a philosophy we in the audience were quick to endorse with wholehearted applause.

Sign up at www.classical963fm.com/category/contests for the Classical Club newsletter. Don’t miss news of events and contests offering free tickets to enjoy performances of such stellar classical artists as Anne-Sophie Mutter, presented by Classical 96.3 FM at the ZoomerPlex (a ZoomerMedia Ltd. property).