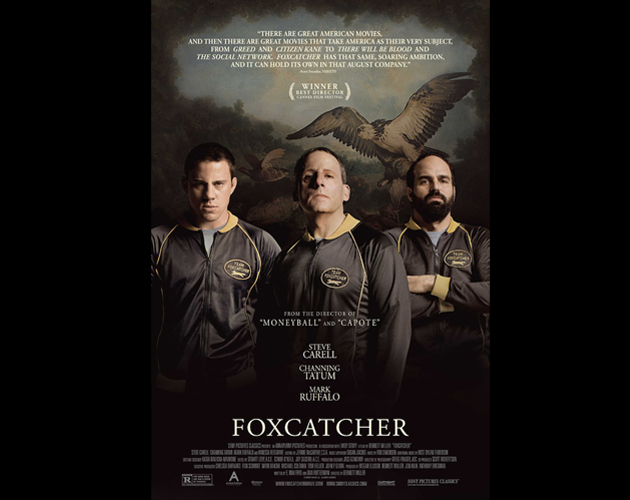 Steve Carell as a soft-spoken time-bomb of paranoia and despair riding a slow burn toward detonation.

Choice Quote: “I’m an ornithologist. But more importantly, I’m a patriot. And I want to see this country soar again.” – John du Pont

The Reality: Fans who mainly know Carell as the bumbling and awkward Michael Scott in The Office, or dim-witted weatherman Brick Tamland in the Anchorman films, are in for a surprise with Foxcatcher, which sees the comedic actor absolutely transform himself into a soft-spoken time-bomb of paranoia and despair, whose fuse rides a slow burn toward detonation.

The hype surrounding Carell’s turn as du Pont is deserved – he’s certainly earned himself an Oscar nomination. Will he win? No. I’d rank Timothy Spall in Mr. Turner, or Benedict Cumberbatch in The Imitation Game, ahead of him. But that’s no knock on Carell, who goes against every comedic instinct in his body to skillfully portray one of the most disturbing, depressing, unbalanced characters you can imagine – especially when you remember that this was a real man.

He’s also forever connected to David Schultz (Ruffalo) — Olympic gold medal wrestler and something of a father figure to younger brother and fellow Olympic wrestling champion Mark (Tatum). When the film begins, Mark, who has his sights set on the 1988 Olympics, is eager to break out of his big brother’s shadow. He wants to prove he can wrestle, and win another gold, on his own, which makes the offer from mysterious, wrestling-obsessed millionaire John du Pont, to come live and train in a state-of-the-art facility on his sprawling family ranch in Pennsylvania, so attractive. The team is dubbed Team Foxcatcher (after du Pont’s family’s ranch).

It turns out Mark and du Pont are, in some ways, suffering in similar familial shadows: the former with his brother Dave, and the latter, something of a man-child desperate to please his cold, distant mother (Redgrave) – a woman who once paid a child to pretend to be her son’s only friend, and then allowed her son to find out about it.

Tensions build as du Pont becomes increasingly obsessed with being perceived as a leader to his stable of wrestlers at Team Foxcatcher – “stable” being an apt term given his mother shows more love to her prize horses than to her own son. Through this perception of leadership du Pont attempts to win his mother’s affection and respect, inviting her to staged training sessions to give the appearance that he’s teaching these Olympic-level athletes how to win. And within this stable Mark is du Pont’s prized thoroughbred, the stallion he plans to ride through to Olympic gold and the realization of his deluded dream to restore dignity and hope and respect to America.

Of course, as history recorded, it all unravels for du Pont and, tragically, Dave Schultz, who eventually moves his family into the facility at Team Foxcatcher to act as a trainer. It’s in this unraveling that Carell shines to an alarming degree, in the way that completely erases any remnant of comedic memory of Carell you may still have lingering in your mind at this point.

Ruffalo is almost a dead-ringer for Dave Schultz, and couldn’t’ be a more kind and sympathetic character, while Tatum is fantastic as a driven but conflicted Mark Schultz, showing off his own acting chops with a few powerful dramatic scenes (not to mention his fitness chops, when you consider the multiple takes required to film each workout and wrestling scene).

Director Bennett Miller and writers E. Max Frye and Dan Futterman deserve praise for creating a psychologically twisted world stuck in a constant state of gloom and uneasiness – like when walking through a bad dream and your gut tells you something just isn’t quite right. Then … wham, that’s when the monster jumps out.

When it’s a bad dream, you run from the monster and hope you wake up. When it’s Foxcatcher, you write glowing reviews about the monster and speculate how many gold statues he might win come award season.

The Verdict: Unsettling, terrifying, engrossing, and a powerful cinematic achievement – apt descriptions of both Carell’s performance and Foxcatcher as a whole.

Foxcatcher opens in Toronto and Vancouver today, and Montreal on Dec. 19.