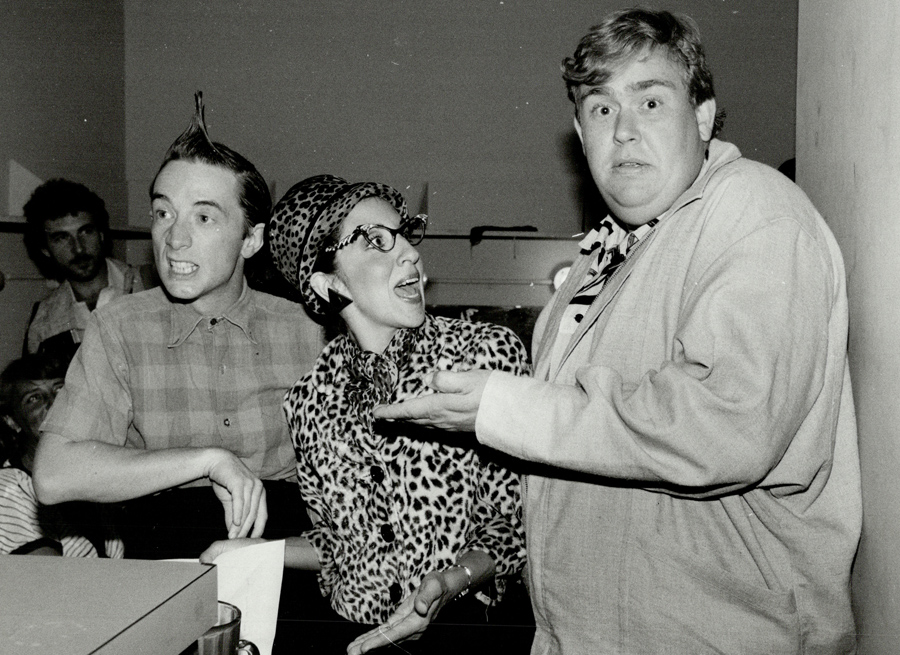 Juul Haalmeyer is one of Canadian television’s unsung heroes, designing costumes for countless shows, from The Pig and Whistle and The David Steinberg Show to Razzle Dazzle and Codco. He was nominated for a primetime Emmy in 1974 for the TV movie The Borrowers and won a daytime Emmy in 2000 for the children’s series Noddy. Plus there were numerous figure skating outings, Mary Kay industrials, and Miss Canada pageants. And he’s still at it, running a wardrobe rental company, Homemade Tarts, out of a squat warehouse building in downtown Toronto.

For most of Haalmeyer’s 40-plus-year career, his mother worked as his assistant and lived with him. Her death in January 2013 was the hardest in a series of recent blows forcing this madcap master of invention to reinvent himself: Haalmeyer has to face the world on his own. He turns 65 this May.

Haalmeyer considers SCTV the absolute highlight of his long career. While he’s proud of the work he did there, and appreciates the off-kilter celebrity the series afforded him, what he cherishes most is the people, the cast and crew. “All the Second City people I’ve worked with had an inner warmth and intelligence beyond words,” says Haalmeyer, seated in his cramped, crammed studio surrounded by SCTV production stills and casual Polaroids. “And so sensitive.”

The feeling is mutual. “I love this man,” writes original SCTV cast member Andrea Martin in an email. “Juul is all creativity and generosity. If it weren’t for Juul, I would not have come up with the characters I performed on SCTV.

“I think what sets Juul apart from other costume designers is his desire to be in the ring with the actor, to put himself in your place and take on the role, as if he were playing the part. He is and was that invested in the outcome,” writes the Emmy- and Tony-winning writer/performer. “He loved creating costumes that had wit and humour, and never stopped until the last sequin was sewn on.” (Martin reunites with SCTV alumnae Martin Short and Eugene Levy in a new sitcom, Working the Engels, airing later this year on Global and NBC.)

SCTV was first broadcast on Global in 1976 as a very cheap, irregularly appearing half-hour. Production bounced between Toronto and Edmonton as the series went through numerous transformations. Haalmeyer joined SCTV in 1981 after NBC picked it up and turned it into a 90-minute weekly show. The series gained a whole new audience in syndication, broadcast as a half-hour on CityTV, for example, beginning in 1984.

“That show was so difficult,” Haalmeyer recalls. “We worked over a hundred hours a week. And we travelled with six huge binders of possible sketches that could come up…. Ben Hur might be scheduled for Monday morning then all of a sudden it was Vikings and beekeepers,” he says, laughing. “‘Okay, get out the glue gun! Put some horns on those helmets!’ It was nuts, absolutely nuts.”

Erin McMichael is a young filmmaker currently shooting a documentary on Haalmeyer. Originally McMichael envisioned a film that commented on the changing nature of Toronto’s Fashion District. “But once we began shooting,” she says, “and Juul started sharing with me, it became very clear that his story, and the personal and professional crossroads he’s now facing, would make a great feature-length film.”

Born in 1949 in Haarlem, Netherlands, Haalmeyer is the second of three siblings. His father, Albert, a painter, had a pottery factory; his mother, Trudy, was a nurse. The young family emigrated from war-ravaged Holland in 1956, bouncing around California for a few years until settling in Eugene, Oregon.

“It was always a very loving, tight-knit family,” says Haalmeyer. “We did everything together.”

But war followed the Haalmeyers to America. The father had spent two years in a German POW camp, a traumatic experience that left him with nightmares and severe angina. When it looked like his two sons would be drafted to fight in Vietnam, Albert Haalmeyer took no chances. One night, unannounced, he bundled the two young men into a car and drove them across the border to Vancouver, en route to his sister in Toronto. “We were not able to say goodbye to anybody,” says Juul. “He didn’t want anyone to know for fear of what could happen.” It was a terrifying first separation. Juul was only 18.

The brothers scrambled to make a living. Juul eventually found work as a shipper at Malabar, Toronto’s celebrated costume house. Less than two years later, by the time his parents and sister joined him and his brother in Toronto, Juul was working in the wardrobe department of CFTO, CTV’s flagship station. He rented a house for the family, even roped in his parents to help on occasional design jobs. But the reunion was short-lived. Five years after the move, the father died of a heart attack. It was a terrible blow.

“My mother more or less had a breakdown,” says Haalmeyer. “She sobbed uncontrollably for ever and ever and ever. I knew I couldn’t leave her alone.” With two TV series set to go in Montreal, Haalmeyer decided to make his mother his first assistant. From then on, she’d go wherever he did. For 25 years, mother and son proved a powerful, durable duo.

“We had great fun together,” says Haalmeyer. “We were always joking back and forth. She loved the work, though she hated the long hours.

“And she was damn good at what she did. She understood quick and dirty.”

The mother-and-son team was a hit among performers, too, adding a homey touch to set, especially when Sophie, Juul’s cocker spaniel, was part of the mix. “Everyone loved my mother,” says Haalmeyer. “They loved her more than me. They loved my dog more than me.”

“How we all loved Trudy,” writes Martin, “the silent, steady foil to Juul’s flamboyant personality. What a great partnership…. They were an extraordinary team, and the love between them was unmistakable and touching.”

Age, long hours and stress caught up with both Haalmeyer and his mother. In 1999 Haalmeyer had a seizure that broke three bones in his back. Then his mother had a head injury from a fall, requiring steroid injections that left her with limited mobility. Haalmeyer soldiered on, caring for his mother despite his bad back and a bout with cancer (of the mouth. Treatment was successful; he’s been cancer-free for six years).

In 2010 Haalmeyer’s sister, also named Trudy, convinced him it was time to find more appropriate care for their mother. They found her a place in a centrally located seniors’ home. Both visited every day until her death early last year.

To this day, Haalmeyer finds himself turning to explain something on TV to his mother, as he would when they lived together. “Sometimes it hits you.”

Business seems less and less likely to fill the void. Haalmeyer gave up designing because of his back, focusing instead on wardrobe rentals. He’s amassed a vast collection of beautifully curated vintage fashions. But the production industry has changed. Long gone are the 25 TV movies he’d get a year. Rising rents and condo developments are another threat. Haalmeyer is one of the last holdouts in downtown Toronto’s once vibrant shmatte trade. He can barely fathom the possibility of closing up shop. “I haven’t let that sink in yet. In reality, I’m such a procrastinator, I hope I die first.”

Being alone is both familiar and new to Juul Haalmeyer. At times, he seems very set in his singleton ways. “I’m very happy and comfortable with the friends I have now,” he says. “I’m not looking for anything at all…. I’ve been on my own for so long, I wouldn’t know how to adjust to suit somebody else. And I wouldn’t want to inflict my manias on anybody. I’m so established in my evil ways,” he says, laughing wickedly.

At other times, however, he sounds ready to step out from the protective bubble he and his mother created. “I feel sad sometimes because I know I’ve missed out on what others can offer me,” he says. “More importantly, I know I have so much to offer somebody.