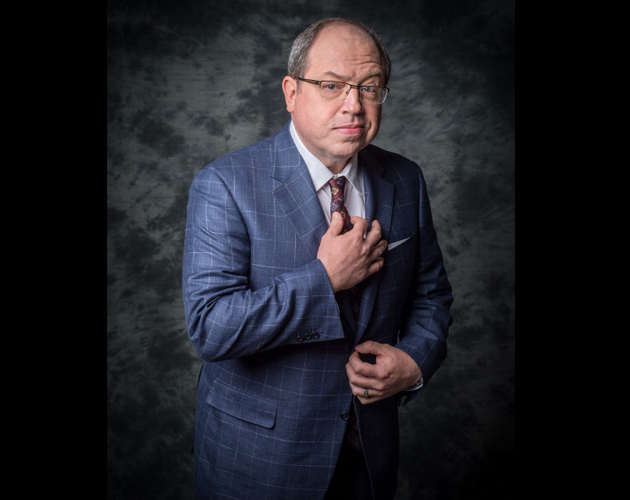 With the recent release of Corner Gas: The Movie, Zoomer‘s Mike Crisolago caught up with creator-star Brent Butt to talk all things CG, including the TV legend he’d pegged to play Oscar’s dad.

BRENT BUTT: When I decided to wrap up the series, my notion was it would be good if we could one day come back and do a one-off stand-alone movie. We had to consider the timing of it because if you do it too soon, what’s the point? And if you do it too far away, it’s kind of old and sad and weird. So five years feels like a nice right amount of time.

The secret to Corner Gas’ global success is …

BB: I wish I knew the answer because then I would just bottle that and do it over and over and over. The only thing that I can kind of put my finger on is that Corner Gas was an authentic show. We kind of operated under the assumption that nobody’s going to watch this thing anyway. We’re doing a show about a gas station in Saskatchewan … so all we can do is make a show that we’re actually proud of. And I think people responded to that authenticity.

We came along at a time when people would say, “We’re making a show that’s edgy and dark.” I always thought it was like when your drunk uncle tells everyone just how cool he is. Our show was bright. There were big blue skies. It was very kind of different from what was on the screens at the time. And you could tell there was no conspicuous effort to try and win anybody over. We were just trying to do what we thought was good.

BB: Bob Newhart. I’m a huge Bob Newhart fan, and I had a storyline in mind where [he] would play my grandfather – Oscar’s dad. And when we find out he’s coming to town, Oscar’s very uptight because he says his father’s a real hard ass who always rode him hard. And then when Bob Newhart shows up, he’s super mellow. And Oscar’s still railing against him: “Why don’t you get off my back!” I always thought that was a really funny dynamic. And we just couldn’t make it come together.

Character arcs? What is this, Friends?:

BB: I didn’t want a series arc or character arcs. I always said nobody learns anything on this show. Nobody learns anything and nothing changes. [Laughs] Nobody learns anything about themselves, there’s no growth, they end up as they started. Partly that’s practical because it allows for the series, in re-runs, to run any episode at any time. But also it was just kind of thematic of a place that doesn’t change, you know, a place that’s kind of locked in time and isn’t looking to move forward … Even when I decided to wrap up the series, and I started talking about the final episode, I said I want this final episode to end in a way that allows us to believe everything is going on as we’ve always remembered it, but it’s just that the cameras have stopped rolling. It’s a bit of comfort.

On his real-life character arc: from small-town Saskatchewan to a hit TV show and an audience before the Queen

BB: Envision [it]? Yes. Expect it? Not really. [Laughs] The things that I envisioned were bigger. I envisioned playing stadiums and going from gig to gig in my personal helicopter. So I have a tremendous capacity to envision things but … my goal was to do stand-up, to be a comedian from the time I was 12. I knew I always wanted to get into TV and movies – I knew that was going to be a part of it – but I always knew it was a spoke that came off the hub of stand-up. I had started stand-up in Saskatchewan but I moved to Toronto [at age 21] because that’s where you had to be to take the next steps. So when I started playing clubs and doing $50 shows, I was thinking “This is all right.” I’m here. I made it. This is the dream.

BB: There’s a story that I have told a few times about being a little kid and getting this air-powered motorcycle. You know, a little model motorcycle that you pumped up with air and then it would drive off and it would jump up ramps and do tricks. It was called TTP – Turbo Tower of Power – and it was fantastic. I got it for Christmas and I played with it all Christmas Day. I woke up Boxing Day morning and I sat up in bed and looked at the foot of the bed. There’s my older brother Lloyd, who’s four years older than me, and he had my motorcycle on the tower pumping it to heights it had never been to before, pointed directly at the wall. Just as I came to and saw him doing that, he flipped the switch to release it, and it rocketed into the wall and smashed into three solid pieces. That was the end of my Turbo Tower of Power. [Laughs] Now he says, “I don’t even remember doing that” and I said, “Yeah, because it didn’t traumatise you. It didn’t scar you emotionally and make you question existence.” [Laughs] It was a bit bigger deal for me.

Corner Gas: The Movie hits theatres across Canada from December 3-7, with TV broadcasts to follow. For more information, visit www.cornergasthemovie.com.