Between the Lines with … Susan Boyle, Talking Her New Album And New Beau (Well, Sort Of) 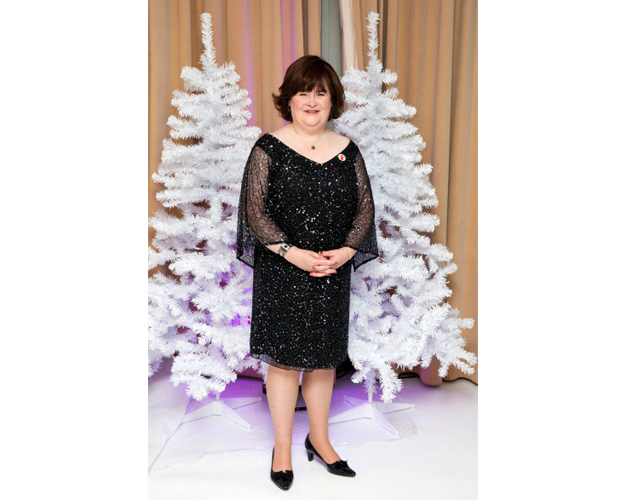 In person, Susan Boyle is about as sweet and down to Earth as you imagine she’d be. She’s polite, modest about her success, and even giggles innocently at the mention her new boyfriend. Just don’t mistake her sweetness for weakness.

For a person who went from church volunteer to overnight best-selling singing sensation at age 48 following a breathtaking performance of “I Dreamed a Dream” on a 2009 edition of the reality show Britain’s Got Talent, she’s shrewd as a show-business vet when it comes to managing her celebrity and the media.

“I met him in America, and that’s all you’re knowing because it’s private,” she says through a laughs when I ask her about her new beau. I prod further, hoping to glean some further information (for the record we know he’s a doctor Boyle met during a stop in Miami). I ask about the difficult balance of maintaining privacy in this day and age.

“It’s a good balance. I like to keep people guessing,” she replies, again with the laugh of someone playing (and winning) a game of catch-me-if-you-can. “It keeps people interested… You have to do that. That’s the psychology.”

In a celebrity culture where sharing the minutiae of your personal life on social media has become the norm, Boyle stands among the few who want to maintain an air of mystery.

It’s no surprise, as Boyle is something of the anti-celebrity. It’s true that her reality show success was a thoroughly modern path to fame, but at heart she’s a woman who still lives in her childhood home in Scotland, and who, for the most part, insists on keeping her personal life just that – personal.

Instead, she and I talked about her career and new album, Hope, which features covers of classics that range from John Lennon’s “Imagine” to Simon and Garfunkel’s “Bridge Over Troubled Water” to Pink Floyd’s “Wish You Were Here.”

Interviewing a singer about their music? What a concept.

(See next page for interview)

On her rise to fame at age 48, and how it might have been different if she’d achieved it earlier in her life:

SUSAN BOYLE: I think if I’d have had it younger, I wouldn’t have been able to handle it. I wouldn’t have had the maturity and the analytical (knowledge) that I have now that I’m older. I don’t think I really had that when I was younger.

The biggest life adjustment she’s had to make since becoming famous:

SB: Probably the [press] want to know more about my private life, and what you’re supposed to say to them regarding privacy and stuff like that. I’ve got to be really careful now [with] what I say to people, but before that it didn’t really affect me.

In light of the fact that her new album is named, and themed, around the idea of hope, where she personally draws her own hope and inspiration from:

SB: Well, I drew my inspiration from my own particular circumstances…and I never gave up when it came to my destiny. I hoped one day that it would actually materialize because I’m a big believer in dreams coming true.

Why she chose this specific set of songs to record:

SB: [Sarah McLachlan’s] “Angel,” for me, it’s about someone who’s just left you and passed on to a new dimension. They might not be around physically, but they’re around spiritually. And that’s a very emotional song (with) a very strong, spiritual connotation…(“Imagine”) is iconic, and I wanted to see if I could have an interpretation of it. “Wish You Were Here” is Pink Floyd’s, and it was sort of getting away from the ballad thing and getting onto the more abstract work sort of thing. I don’t like to bring up the same thing all the time. I like to surprise people.

On whether there’s added pressure when recording her own versions of such legendary songs:

SB: There’s no pressure really. It shouldn’t be about pressure. It’s about being alongside the original people. It’s about your own interpretation. It’s what you take from the actual work itself and what you convey to your audience.

Her advice for people who have dreams they want to accomplish but who feel it’s too late in life:

SB: It’s never too late and you’re never too old. Don’t give up….I never would have imagined [all of her success]. All I did was walk on the stage and sing a song. I didn’t know what was going to happen. And maybe it’s better not to know what’s happening because it all came as a very pleasant surprise and I’m enjoying every minute of it. [Laughs]

What she hopes people take from her new album:

SB: Music is about communication, and it’s about taking the listener on a journey. So I hope the inspirational songs on the album will take them on a journey and give them some hope to aspire to what they want to do themselves.