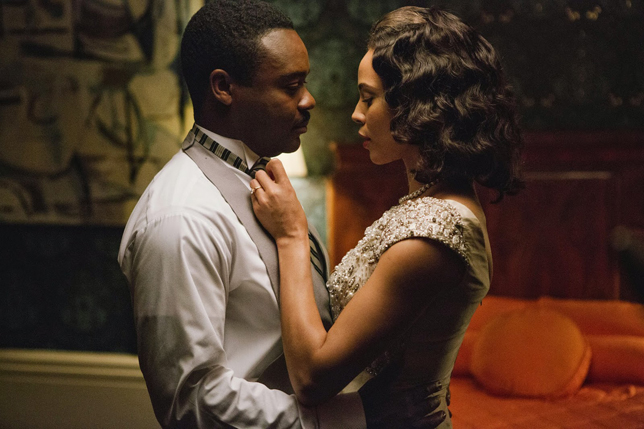 Following on the heels of yesterday’s Screen Actors Guild award nominations, the Hollywood Foreign Press Association doled out its annual Golden Globe nods this morning (see the full list below). Cue the cheers for the nominees and the jeers for the snubs.

Of course, to really cheer or jeer, you probably have to consider an award show like the Golden Globes as something more than a chance for rich people to gratuitously pat each other on the back while exchanging little gold statuettes. I, personally, am not quite that jaded (as, I suspect, neither are most reading this). True, award shows can seem pretty hollow, and they run way, WAY too long. But if we’re going to hand out little gold statuettes for movies and TV, there’s a part of me (and, likely, you) that wants to see my favourite actors/actresses receive those little gold statuettes.

And it was precisely that part of me that was growling at the television this morning when the Best Actor in a Motion Picture, Drama, nominees were announced, and the name “Timothy Spall” did not appear on the list. This is the same man who won the top acting award at Cannes this year for his career-defining performance as English painter J.M.W. Turner in the stunning biopic Mr. Turner. No offence to Jake Gyllenhaal (Nightcrawler), but he somehow managed to nab Spall’s spot.

And Spall isn’t the only perceived high-profile “snub.” Angelina Jolie (Unbroken) and Jean-Marc Vallee (Wild) for Best Director, Hilary Swank (The Homesman) for Best Actress, Drama, the wonderful Quebecois drama Mommy for Best Foreign Language Film or The Walking Dead for Best TV Series, Drama, to name a few, have raised the ire of film/TV buffs.

But let’s not dwell too long on the snubs. For those who received nods, this could prove the beginning of a very successful award season. Take Ava DuVernay and David Oyelowo, who received well-deserved nominations for Best Director and Best Actor, Drama, respectively for the brilliant Martin Luther King Jr. civil rights drama Selma (both were in Toronto, by the way, to screen the film last night at the TIFF Bell Lightbox). Selma is also in the running for Best Picture, Drama. It’s also great to see Michael Keaton back in the spotlight, this time for Birdman (which nabbed Keaton a Best Actor nod and the film on the Best Picture, Comedy or Musical list).

I question St. Vincent landing on the Best Picture, Comedy or Musical list – for me, it’s the 2014 version of Inside Llewyn Davis, a film receiving way more praise than it probably deserves – but I was thrilled to see Julianne Moore get two Best Actress nods (for drama in Still Alice and comedy in Maps to the Stars).

On the TV side, with Breaking Bad and Mad Men out of the mix, shows like The Affair, How to Get Away with Murder and the medical drama The Knick are making plays for a few statuettes in multiple categories. Meanwhile, Amazon’s comedy Transparent, starring Jeffrey Tambor as a transgendered woman, nabbed the show and its star top nods.

See the next page for the full list of nominees. And don’t forget, the Jan. 11 Golden Globe broadcast is hosted by Tina Fey and Amy Poehler – which means that, at best, it’ll be an award ceremony filled with cutting quips and lots of laugh-out-loud moments. And, at worst, the show will only feel three hours long – about half as long as these shows usually feel when they’re being dragged along by lesser hosts.

The Theory of Everything

Felicity Jones (The Theory of Everything)

Eddie Redmayne (The Theory of Everything)

Best Actress In A Motion Picture, Musical or Comedy

Julianne Moore (Maps To The Stars)

Emily Blunt (Into the Woods)

Best Actor in a Motion Picture, Musical or Comedy

The Book of Life

How to Train Your Dragon 2

Jessica Chastain (A Most Violent Year)

Meryl Streep (Into the Woods)

Jóhann Jóhannsson (The Theory Of Everything)

Viola Davis (How to Get Away With Murder)

Orange Is the New Black

Best Actress in a TV Series, Musical or Comedy

Best Actor in a TV Series, Musical or Comedy

Best Actress in a Mini-Series or TV Movie

Best Actor in a Mini-Series or TV Movie

Best Supporting Actress in a Series, Mini-Series or TV Movie

Best Supporting Actor in a Series, Mini-Series or TV Movie