Popcorn Picks: The Hobbit: The Battle of the Five Armies 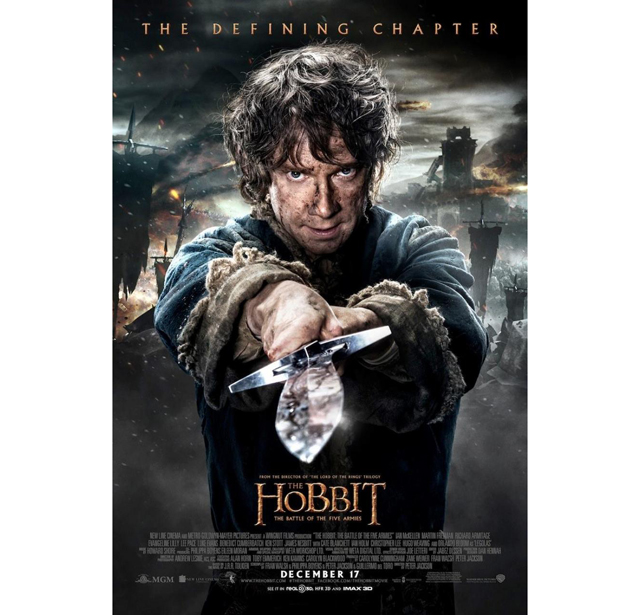 There’s little more hype you can get than being the final film in the epic The Hobbit trilogy.

Choice Quote: “Farewell, Master Burglar. Go back to your books, your fireplace. If more of us valued home above gold, it would be a merrier world.” — Thorin Oakienshield (Richard Armitage) to Bilbo (Martin Freeman)

The Hype: There’s little more hype you can get than being the final film in the epic The Hobbit trilogy. Die-hard fans of the book and films were in a bit of an uproar about the title, which many felt should stay true to the book – There and Back Again – but Hollywood, no doubt, stepped in to add an extra measure of drama to the title. Bilbo and his company of dwarves have retaken Erebor, the dwarve’s mountain seat/treasure trove, from the deadly dragon Smaug. They must defend it, and defeat the evil that is lurking in the east. The battle for Mount Erebor proves that men and elves and dwarves, when bound together, can conquer goblins, orks and the dark forces of evil.

The Reality: All of the above, plus greed, heroism, shields shattering, spears being chucked and a troop of killer elves with bowman skills that would make The Walking Dead’s Daryl Dixon (elvish) green with envy. But, if you love action and fantasy, this is the most power-packed of the three Hobbit films.

The Canadian actor, Evangeline Lilly, whose elf character was created for the films to provide a bit of kick-ass female presence, commands the screen when she’s on it – we could have used more! – and her fellow elf warrior, Legolas, as played by Orlando Bloom (he embodies Legolas and, in a poignant scene, provides a much-needed link to The Lord of the Rings films), provide ah-inducing acrobatics and fight scenes that make the film worth watching again.

But for Zoomer, what makes the film so powerful are a few key, but short, scenes leading up to the final crush of battle. In once such scene, the combined age of the actors on screen is more than 250 years – and there are only four of them: Cate Blanchett, 45 (Galadriel), Hugo Weaving, 54 (Elrond), Christopher Lee, 92 (Saruman) and Ian McKellan 75 (Gandalf). Galadriel and company arrive to rescue Gandalf, and what ensues is a mind-blowing fight scene, filmed in such a way – watch for the overhead camera angles – that you can’t escape the physicality these actors had to bring to their roles. It impresses, and it is one of those film snippets that some might feel makes watching the whole movie worth it.

Can the grandkids watch?: This is the most bloody and violent of the three films, and unless the kids have seen the others, we would reserve this for kids, tweens and up.