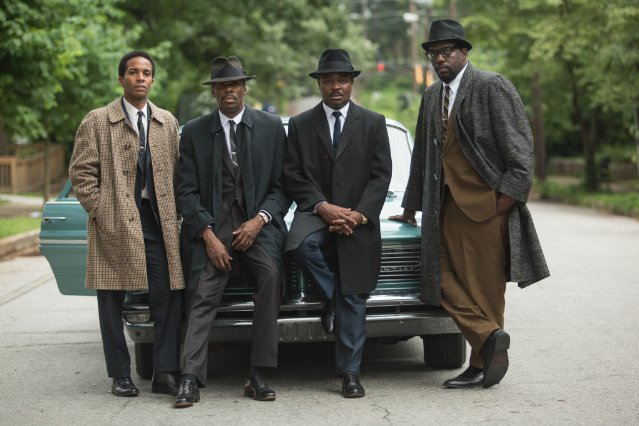 Merely a few weeks into 2015, Selma has undeniably set the bar for best film of the year. Your move, Hollywood.

Choice Quote: “What happens when a man stands up and says enough is enough?”

The Hype: The story of the Selma to Montgomery civil rights marches through Alabama in 1965, led by Martin Luther King Jr., James Bevel, Hosea Williams, and John Lewis.

Book-ended by these two events that changed the course of 20th century history is a third: the Selma to Montgomery marches. Just as important and just as historic, the marches succeeded in rallying the American public and forcing U.S. President Lyndon B. Johnson’s hand in passing the Voting Rights Act, which made it illegal to deny any citizen the right to vote based on racial discrimination. It’s incredible to think, as director Ava DuVernay said, that this story has never been told in a major motion picture before.

Now that it finally has, no review can start without citing the brilliance of David Oyelowo’s portrayal of Martin Luther King Jr. In fact, it’s so profound that at a special screening at Toronto’s TIFF Bell Lightbox, followed by a live, onstage interview with Oyelowo and DuVernay, a number of audience members literally gasped when Oyelowo opened his mouth and a British accent came out.

That’s because Oyelowo embodies King in this film – his voice, his look (he gained weight for the role), his inflections, his body language, his calm rationality in the face of irrational conflict, his courage and vulnerability. And Selma doesn’t shy away from the fact that, like any human being, King had his flaws. Yes, he had self-doubts. Yes, he even had moments of personal weakness.

But what Selma shows us of is that the will of one great person, like Martin Luther King Jr., attracts those of similar convictions, and by refusing to be denied the group continues to grow and great things can, and do, happen.

Of course, before some great things come to fruition there’s a lot of hard work to be done. And that’s really what puts this film over the top – led by the career-making performance of its star, the rest of the cast meets the challenge of portraying the struggles, heartbreak, and ultimate victory of this time.

Punctuated by performances from Common (James Bevel), Carmen Ejogo (Coretta Scott King), Canadian Stephan James (John Lewis), the great Tom Wilkinson (LBJ), Wendell Pierce (Hosea Williams), and Tim Roth (George Wallace), among others, Selma is a carefully crafted narrative that lays bare the brutality, the fear, and the heroics that occurred in Alabama in 1965. The film employs actual Selma to Montgomery protesters as extras, while also featuring appearances from other giants of the civil rights movement, including Malcolm X and C.T. Vivian.

That said, DuVernay is careful not to allow sentimentality or cliché to infiltrate this tale, and uses her stellar cast and superb script to their full potential to tell a story that’s been waiting to be pulled out of the history books and onto the screen for far too long. And the result speaks for itself.

The Verdict: DuVernay’s masterful direction, Oyelowo’s career-defining performance, and a cast that more than lives up to the task of re-creating the tragedy and the heroics of these marches: it’s early in 2015, but Selma has set the bar for best film of the year. Your move, Hollywood.

Selma is now playing in theatres.