Our 10 Favourite Moments from the 2015 Golden Globes 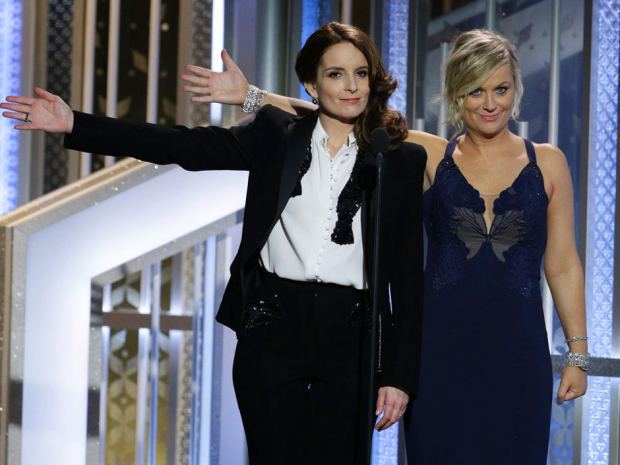 From the hosts to Prince to Julianne Moore, our favourite 2015 Golden Globes moments

The awards have been announced, the champagne’s been popped, and now it’s time to look back at our favourite moments from the 2015 Golden Globes.

If you don’t think a good host sets the tone for an entire award show, you haven’t seen Seth MacFarlane host the Oscars. And, chances are, you’ve never watched Tina Fey and Amy Poehler host the Golden Globes.

There’s a reason this was the third year in a row they hosted the show – they’re creative, hilarious, and take the award show buzz with a grain of salt.

When they were on they kept the program moving at a lighthearted pace, from funny one-liners to debating which actors they’d rather sleep with. Sure, they were curiously absent for large chunks of the show, so much of their best work came early, but they still managed to get some good lines in. Some of our favourites included:

Fey’s takedown of Sony: “Tonight we celebrate all the great television shows we know and love, and all the movies North Korea was okay with.”

Poehler’s commentary on Hollywood’s treatment of women: “Boyhood proves there’s still great roles for women over 40, as long as you get hired when you’re under 40.”

But best of all, their assessment of George Clooney’s Cecil B. DeMille Award: “George Clooney married Amal Alamuddin this year. Amal is a human rights lawyer who worked on the Enron case, was an adviser to Kofi Annan regarding Syria, and was selected for a three-person U.N. commission investigating rules of war violations in the Gaza Strip. So tonight, her husband is getting a lifetime achievement award.”

It wasn’t a particularly moving moment, but Billy Bob Thornton’s win for Best Performance By An Actor In A Mini-Series Or Motion Picture Made For Television resulted in an acceptance speech that could also serve as a bit of advice for certain celebs who don’t know when to keep their mouths shut:

“These days you get in trouble no matter what you say. I know this for a fact. So I’m just going to say thank you.”

From time to time award shows offer moments of genuine emotion. “You like me! You really like me!” comes to mind.

At the Golden Globes, it was Gina Rodriguez, star of CW’s comedy/drama Jane the Virgin. Not only was her win for Best Performance By An Actress In A Television Series – Comedy Or Musical arguably one of the biggest surprises of the evening considering her competition – Edie Falco, Julia Louis-Dreyfuss, Lena Dunham, Taylor Schilling – but it was also the first Golden Globe CW’s ever won.

It was Rodriguez’s acceptance speech, however, that made the biggest impact, as she thanked her family and discussed the win through tears.

“Thank you to my mom and my dad for telling me to dream big and to never stop dreaming. To my siblings, to my sister … for being the biggest role models in my life. This reward is so much more than myself. It represents a culture that wants to see themselves as heroes. My father used to tell me to say every morning to myself it’s a great day. I can and I will. Well Dad, today’s a great day. I can and I did.”

The show’s creator/writer/director Jill Soloway offered up perhaps the speech of the night in accepting the first award:

“I want to thank the trans community. They are our family and they make this possible. This award is dedicated to Leelah Alcorn and to too many trans people that died too young. It’s dedicated to you, my trans parent, if you’re watching at home right now. I want to thank you for coming out because in doing so you made a break for freedom and you told your truth. You taught me how to tell my truth and make this show and maybe we’ll be able to teach the world something about authenticity and truth and love. To love.”

In accepting his Best Actor award, Tambor, 70, declared, “Oh this is big. This is much bigger than me,” thanking Soloway and his wife before a final nod to the transgender community.

When Common and John Legend took to the stage to accept the award for Best Original Song for “Glory” from the film Selma, the former, who also plays civil rights activist James Bevel in the film, led off with a beautiful acceptance speech that reflected on the resonance the story of the Selma to Montgomery marches holds for him.

“The first day I stepped on the set of Selma I began to feel like this was bigger than a movie. As I got to know the people of the Civil Rights Movement I realized I am the hopeful black woman who was denied her right to vote. I am the caring white supporter killed on the front lines of freedom. I am the unarmed black kid who maybe needed a hand, but instead was given a bullet. I am the two fallen police officers murdered in the line of duty. Selma has awakened my humanity.”

Speaking of the Best Original Song category, pop star Prince showed up unexpectedly to announce the winner of the award. It was a quick appearance, but if anything can get a room full of some of Hollywood’s biggest stars to perk up with excitement, it’s a surprise Prince cameo. When Prince walks into any room:

When Prince walks into any room: https://t.co/pfqcnHel6C

The Orchestra Avoided Cutting Off Award Winners Some of the most awkward award show moments come when the orchestra tries to nudge a winner offstage by starting to play when an acceptance speech goes on too long. Luckily tonight the orchestra (mostly) sat on their hands, allowing the winners to say their thanks in peace. The Duos of Kristen Wiig and Bill Hader & Lily Tomlin and Jane Fonda Make Cases to be Next Golden Globes Hosts Of course, Saturday Night Live alumni Wiig and Hader weren’t actually auditioning for the jobs. They simply came onto the stage to present an award, and decided to show off a few (very bad) celebrity impressions, seemingly more to make each other laugh than the audience. The audience, however, loved it. My personal favourite was Wiig’s terrible Robert De Niro impression, which was supposed to be from The Godfather Part II: “Hey, who’s in my driveway. I gotta get into the city over here.” The impressions were such big hits that the Internet has already exploded with campaigns to get the duo to host the Golden Globes next year. As well, Lily Tomlin, 75, and Jane Fonda, 77, who co-star in the new Netflix show Grace and Frankie, quipped about the award show’s treatment of male comedic actors (“It’s nice at last that men are getting the recognition they deserve for being good at comedy. You’ve come a long way, baby”) and joked about their time on set of the 1980 film 9 to 5. Tomlin: Don’t you remember that day on the set I picked up that old rotary phone and said, “One day people will be able to watch things on this?” Fonda: I thought you were just high that day. Tomlin: Two things can be true. Imagining Lily Tomlin and Jane Fonda high while filming “9 To 5” from now on, thanks

Imagining Lily Tomlin and Jane Fonda high while filming "9 To 5" from now on, thanks https://t.co/5Y726tXMOP

Well, technically Michael Keaton won, for Best Performance By An Actor In A Motion Picture – Comedy Or Musical for his starring turn in Birdman, but a generation of fans (including myself) fondly remember the 63-year-old as the caped crusader in the late 1980s and early 1990s.

Keaton, for his part, got choked up when delivering his acceptance speech, discussing his childhood, his parents’ sacrifices while raising him, and his son:

“Shoot. Two things I said I wasn’t going to do – cry and give air quotes.”

Ever since screening the brilliant drama Still Alice – about a university professor with early onset Alzheimer’s – at last year’s Toronto International Film Festival, I’ve been telling anyone who’ll listen that Moore deserves all the recognition she can get for her heartbreaking portrayal of the title character. Tonight, she won the award for Best Performance By An Actress In A Motion Picture – Drama. Could an Academy Award be next?

What were your favourite Golden Globes moments from the evening? Tell us in the comments below.