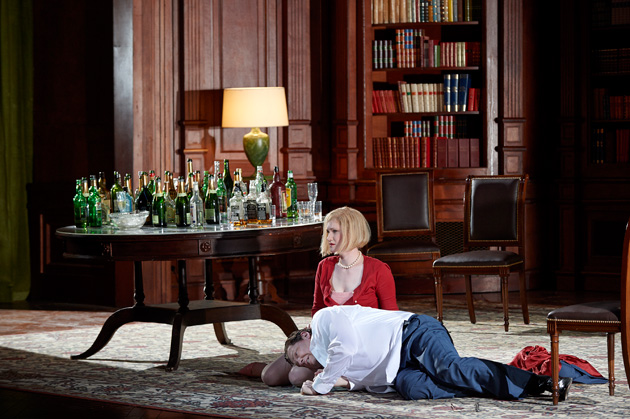 If Michael Brady, the dad in The Brady Bunch, had been a Mozart tenor, he would have been Michael Schade.

The Canadian opera star, who turns 50 today and takes the stage of Toronto’s Four Seasons Opera House tomorrow for the opening of the Canadian Opera Company’s Don Giovanni, is the dad in a blended family of eight kids, ranging in age from 8 to 24.

“The truly wonderful thing is that each of these eight children get along,” he says.

But, he adds, “This house in Oakville, on occasion, tends to be like a major restaurant.”

And despite his success in the world’s renowned opera houses — Vienna, Milan, London, New York — Schade insists his greatest success is “having kids who talk to you.”

About this significant birthday, he says “My biggest thing about turning 50 is that for the first time, I’m looking backwards, thinking about what I’ve done in my life, about taking stock.”

What Schade has, along with his domestic contentment and chaos, is a career that’s included performing the role of Don Ottavio, the upright nobleman — Schade compares him to Lord Grantham in Downton Abbey — in more than 100 places.

But none of those productions have been anything like what audiences will see in Toronto.

The COC’s Giovanni is the creation of iconoclastic Russian theatre director Dmitri Tcherniakov whose vision is beyond cutting edge.

“A crazy man,” says Schade. “A mad man, but there is brilliance. I was a little floored, but in a positive way, that he dares to do such a modern production.”

Besides the modern setting, he says, “It’s cutting edge in the sense that it delves deeply into the psychological aspects of each character.”

One great difference audiences will see, he says, is that characters remain on stage when they would not normally be there in other productions.

“They are silent, like witnesses. Our bodies and attitudes as we sit and watch reflect the psychological drama.”
Schade acknowledges that he’s done modern productions “where I’ve said, ‘This is crap’ — where, when you’re on stage, you think,

‘This looks silly and doesn’t work.’

This is not the case with this production. Is this my favorite Don Giovanni? I don’t know yet. But it is viable and interesting and will be quite glorious.”

Schade sees it as another adventure in a life full of adventure — something he doesn’t want to diminish as he ages.

His voice, he says, has grown richer with age, leading to new repertoire, “the ability to sing well north of Mozart into dramatic material, even Wagner, and baroque music.”

In the future, he says, “I want to sing, manage and also want to have a teaching element.

“There is a gypsy element to our lives. We are blessed with this beautiful house in Oakville, but we have also designed and built a rooftop apartment in Vienna. Canada is a wonderful place to be based but Vienna has always been a capital where cultures meet.

We’re crazy enough to say we like this life — as long as we can fly and walk and run.”

Nevertheless, Schade has also has another vision of the future.

“My theory is that in about 15 years, we will have our lives organized with just so much money and just so many operas, we will be prepared with our bags packed for months of travel, to see Machu Picchu, Australia, to cruise around the world, the cab will be at the door — and one of the kids will show up with triplets and a dog. I just know that’s going to happen!”