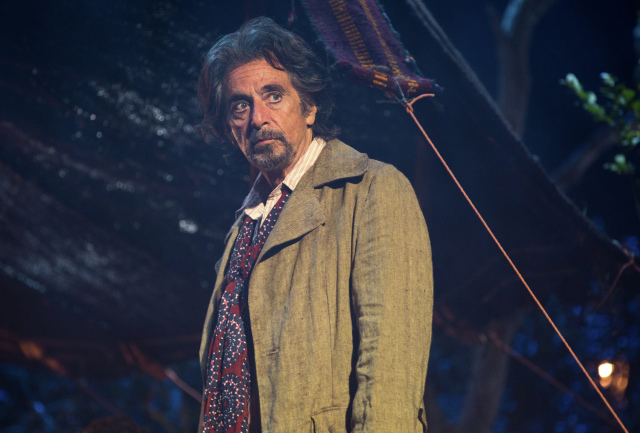 Clever, funny and heartbreaking, The Humbling sees Al Pacino at his most vulnerable – a broken man who, slowly losing his faculties to age, takes aim at himself with a shotgun and misses the shot. “Hemingway,” he admits, “must have had longer arms.”

The Hype: Simon Axler (Pacino) was a star of stage and screen, but after an embarrassing accident while performing Shakespeare, he struggles with memory loss, hallucinations and a stalker who tries to enlist him to kill her husband. Officially retired from the stage, Simon takes a lover, Pegeen (Gerwig), the daughter of a former co-star of his (Wiest), who is nearly 40 years his junior and a lesbian.

See It or Skip It? Clever, funny, at times heartbreaking, The Humbling is Pacino at his most vulnerable – a broken man who, slowly losing his faculties to age, takes aim at himself with a shotgun and misses the shot. “Hemingway,” he admits, “must have had longer arms.”

Axler’s retired, no one wants to publish his memoirs, and one of the few offers of work he receives comes courtesy of a hair transplant company. Of course, it’s not all dour and dreary. Pacino gets to flex his comic muscles here – especially in scenes with his stalker – and the relationship with the much younger Gerwig adds, albeit temporarily, a spring to his step. Pegeen, however, never proves entirely likeable, as in a scene when she critiques his apology like a theatre critic picking apart a performance, only furthering audience pity for Axler.

Grodin is fine as Axler’s agent, while Wiest and Dan Hedaya, as Pegeen’s parents, make their short screen time as entertaining as possible. The film does get a little over-dramatic at times, including toward the end, but Al Pacino carries it and creates such a sympathetic Axler that the audience can’t help but root for this aging underdog. Humble? Yes. But washed up? Pacino’s not even close.

The Verdict: Pacino’s still got it.