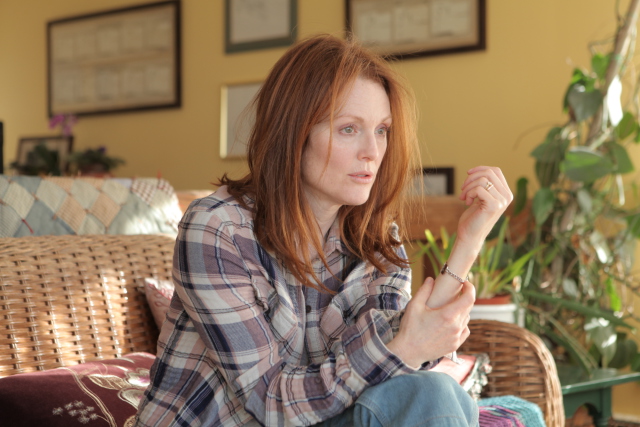 Julianne Moore’s career-defining performance is a blunt and unflinching portrait of a 50-year-old professor diagnosed with early onset Alzheimer’s.

Choice Quote: “It feels like my brain is dying, and everything I ever worked for in life is going.” – Alice

The Hype: The unexpected diagnosis of early onset Alzheimer’s turns 50-year-old Dr. Alice Howland’s (Moore) life upside down. The successful linguistics professor struggles through both the inevitable cognitive decline and the toll, both physical and emotional, that the disease takes on her family.

See It or Skip It? Definitely see it.

A sincere, dignified and honest portrait of the toll Alzheimer’s disease takes on both the patient and those who love them, Still Alice is, without a doubt, Julianne Moore’s most poignant performance to date.

This isn’t a film that glosses over the realities of the disease. It’s brutal. It’s unforgiving. It hits hard and, in Alice Howland’s case, fast. And it doesn’t care if, during your busy day-to-day life, you really don’t have time for it.

Moore does a beautiful job illustrating the ugly progression of this disease, beginning with the simple forgetting of words through not being able to find the bathroom in her house to not recognizing her own children. But it’s also the subtleties of her loss of speech, the way she walks, her body language, the hollow gaze in her eyes, the plan of action when the disease has gone too far. After all, Alzheimer’s is so much more than just forgetting things.

Alice, luckily, has a strong family core of support, including her husband, John (Baldwin), who at first refuses to accept the diagnosis, and her children, Anna (Bosworth), Tom (Parrish) and Lydia (Stewart), who struggle with their mother’s decline in very real, raw and loving ways.

But this film isn’t just a tearjerker about someone with a terminal illness. The climactic scene, where Alice heroically fights back against her declining faculties to deliver an impassioned speech, epitomizes the core of this film perfectly: it’s not about dying from Alzheimer’s. It’s about living, as fully as possible, with it.

The Verdict: This film has had me rooting for Julianne Moore to nab her first Oscar ever since I screened it at TIFF last year. She’s won multiple statuettes for it this award season, including a Golden Globe, and has to be considered a favourite at the Academy Awards, where she’s nominated for best actress.

More importantly, though, is the fact that this film puts the spotlight squarely on Alzheimer’s, offering both a realistic look at its toll on sufferers and, believe it or not, a sense of hope that one can maintain the essence of who they really are even after the diagnosis is handed down.