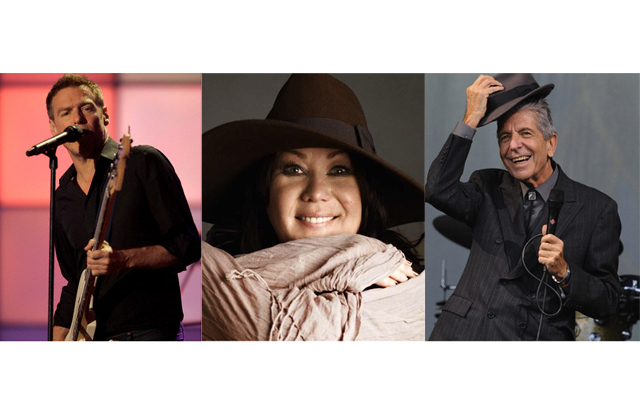 Leonard Cohen, Bryan Adams, Jann Arden, and Molly Johnson are among the big name boomer contenders for the 2015 Juno Awards. Meanwhile, Neil Young’s 2014 Flannel Renaissance, which included releasing two albums, wasn’t enough to nab him a single nomination, which were announced this morning at Toronto’s Danforth Music Hall. For those keeping track at home, that’s three Juno nods for Nickelback – yep, Nickelback – and zero for Young.

Cohen, Adams, and Sarah McLachlan will duke it out with Deadmau5 and The Weeknd for Juno’s top honours – Artist of the Year – an award Cohen famously beat Justin Bieber for in 2013, sending shockwaves through a nation of Beliebers – some of whom began questioning their very existence (along with questioning “Who is Leonard Cohen?”, “What are the Juno awards?”, and so on).

Overall, Cohen leads the boomer pack with four Juno nominations for his 13th disc Popular Problems, released on his 80th birthday last year. Along with Artist of the Year he’s up for Album of the Year, Adult Alternative Album of the Year, and the Juno Fan Choice Award.

Sarah McLachlan, 46, received two nods, for Artist of the Year and Adult Contemporary Album of the Year, for her disc Shine On, while former Zoomer cover person Jann Arden, 52, also nabbed a nomination in the latter category for her album Everything Almost. Jazz chanteuse Molly Johnson, 55, got a nod for Vocal Jazz Album of the Year for her Billie Holiday cover album Because of Billie, and Daniel Lanois, 63, is up for Instrumental Album of the Year for Flesh and Machine.

Beloved children’s performers Fred Penner, 68, and Raffi, 66, are both in contention for Children’s Album of the Year.

Rock legends RUSH will also be honoured with the Allan Waters Humanitarian Award, for “their music and devotion to philanthropy and humanitarian causes, both of which have touched millions of lives and spanned generations.”

The 2015 Junos take place on March 15, live from Hamilton, ON. For a full list of nominees, visit www.junoawards.ca/nominees/.