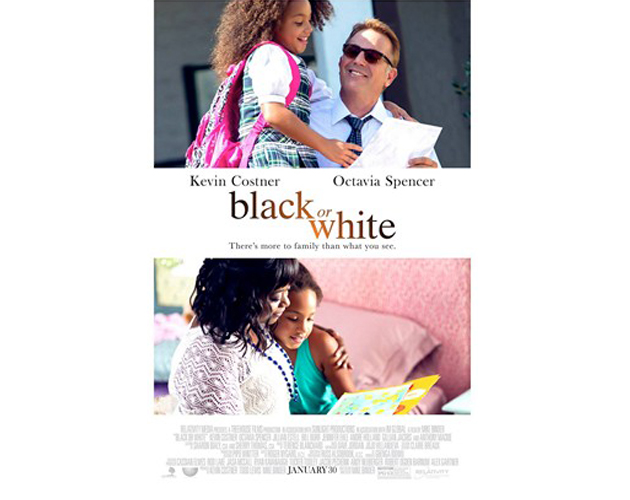 Choice Quote: “This isn’t about black and white. This is about Eloise.”

The Hype: After losing both his wife and daughter, Elliot Anderson (Costner) becomes the sole guardian of his granddaughter, Eloise (Estell). But when her other grandmother, Rowena (Spencer), launches a custody battle on behalf of her side of the family, the situation breaks down into a battle over race and the guardianship of Eloise.

The Reality: This film isn’t the meditation on race relations in America that some critics make it out to be, or think it was supposed to be, or perhaps even that director/writer Binder may have hoped it’d be. Instead it’s a drama with comedic elements, touching at times and even laugh-out-loud funny, but also overreaching in the moments it attempts to be profound.

Rather than offer a meditation on race, Black or White seems to demonstrate just why the subject can be such a complicated one in the first place. On one side, Elliott, the rich but alcoholic white grandfather who lives in an upscale Los Angeles community and sends his granddaughter to a private school. On the other, Rowena, the African-American grandmother and self-made entrepreneur who supports an extended family in a much poorer neighbourhood. Her son Reggie (Holland) is Eloise’s estranged father, a drug addict who suddenly returns to the picture when Eloise’s care is contested. The custody battle eventually breaks down into a debate over race vs. competence. Questions such as “Do you dislike black people?” are asked but no great insight into racial relations follows. And in the middle, there’s perhaps the most adorable 10-year-old you’ve ever seen, played with such sweetness by Estell.

Costner and Estell boast a genuine chemistry, allowing both the tender moments – such as the scene where Costner reads her a story before bed – as well as the playful ones to resonate. Spencer is equally loveable as the kind-hearted “Grandma Weewee” who loves her family but who doesn’t hesitate to crack the whip when needed. It’s Toronto-born actor Mpho Koaho, however, who steals many a scene as Eloise’s brilliant but socially-inept math tutor Duvan. Think The Big Bang Theory’s Sheldon Cooper, but much friendlier.

Virtually all the performances are spot on for what they’re meant to be. In fact, I’d like to see Anthony Mackie, who plays Rowena’s lawyer brother Jeremiah, get a shot at another, more dramatic courtroom role. And the fact that the film centres on two grandparents and they grandchild as the focal point offers a twist on the traditional familial drama.

The problems begin when the film starts delving into the schmaltzy – visions of Elliot’s dead wife – or the over-dramatic, such as a climactic courtroom speech that, while well-intentioned, isn’t quite up there with “You want the truth? You can’t handle the truth!”

The film isn’t perfect, but it’s a fun few hours. For all the fighting back and forth, both families have Eloise’s best interests at heart, leaving the audience to root for some kind of a middle-ground solution.

For some viewers, that’s part of what endears them to the movie. For others, that’s part of the bigger problem pertaining to the way ideas of race are examined and oversimplified in the film. In the end, your enjoyment will likely hinge on your expectations going in.

Can I bring my kids and grandkids to see it?: Older kids may enjoy it, but it’ll probably go over the heads of the younger ones.