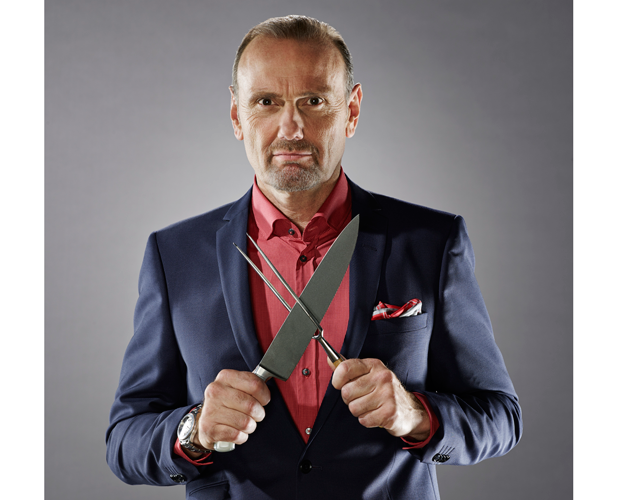 The second season of MasterChef Canada is now in full swing after its Superbowl Sunday premiere. Judge and co-founder of one of Canada’s leading fine dining restaurant companies, Oliver & Bonacini Restaurants, Michael Bonacini took a few moments to discuss the show with us.

Tianna Robinson: Are you ever surprised by some of the home cooks’ capabilities?

Michael Bonacini: I and my fellow judges are equally impressed by the skill set they have. The basic knowledge, the ability to tackle culinary techniques that one would  associate with seasoned hands, skills and expertise. As part of the process, we are looking for individuals that are keenly fanatical about cooking and and food and are almost at the point where they want to change their careers or have the option to get into a professional kitchen or open up their own culinary empire whether it be a coffee shop, a catering business or indie-style restaurant. So these are people that at some point in their life decided, “How can I get into the food scene?”

Once they know they are going to be part of the auditioning crowd, they seem to go insane in terms of studying, reading, cooking classes, cooking this, that and the other. I hear all of these stories from them quite often and I think that’s incredibly enlightening and fascinating and amazing that there are so many people out there that are just insanely fanatical about food. It’s great.

TR: Does that play into your role at work?

MB: I am a part of a company that owns multiple restaurants from very casual to high end. But the attitude toward food is identical. Whether you’re making a quiche or  a lobster thermidor, one’s appreciation, love and passion for food should not change. What I find incredibly inspiring is the commitment to learning, the commitment to hard work, the commitment to wanting to create every single dish to be as beautiful as the last as well-presented, as tasty. We constantly look at the dishes on our various menus with our cooks and want to improve them. And the teams behind that – it’s fascinating. In the world today, certainly in North America and certainly with the majority of the dining public, we are always out to try a new food, a new experience, a new food ingredient, a new design and feel and vibe. That makes it exciting, challenging. It makes it a very dynamic business, and that is a vital ingredient to success.

TR: Do you ever find yourself inspired by a plate you’re served? Some judges say they would serve it in their own restaurant. Do ever begin to rethink your menus?

MB: It is something that we say and in that moment, that particular dish – there have been a few of those – call it a eureka moment – where you’ll say “jeeze, this dish could work in three of my restaurants.” Or this dish with a little more tweak on this end or we serve it with that. Hey, I would be happy and proud to have this in my restaurant. Either to eat it or to have it as part of my menu. And that is incredibly inspiring for the judges, for the show. I can’t imagine how elated the home cooks must feel. And you know the show ­– it swings in roundabouts! You’ll get incredible praise today but you don’t know what’s under that mystery box tomorrow and, boy, you could be in the dunk tank before you know it!

TR: It’s an emotional roller coaster. How hard is it to say goodbye to the contestants?

MB: You know the first few episodes you’re still getting to know the cooks, their strengths, their weaknesses, who they are. Which is the choppy one, which is the timid one, who’s got some skill and loves to hog the camera and the soundbites. But as the season progresses, you really connect with them as individuals, who they are what they’ve gone through, their family, what drives them, what motivates them, what wears on them, what makes them not cook well for that particular day. And when we do have to let someone go, many times I struggle to hold tears back. It’s really emotional because they are baring their all on TV to people they don’t know, to their colleagues. It’s like a fight to the death. This is the modern-day coliseum – minus the lions and bears! The battle of the gladiators.

TR: When it comes down to American vs. Canadian [Masterchef], what advantage do you think Canadian home cooks have? I think there is more multiculturalism here, but what would you say?

MB: I love both shows. I am fascinated by Masterchef Junior. There are definitely differences between the American and Canadian, and it’s not just the judges. We’re often asked, “Are you the nice guy?” or “Who’s the Gordon Ramsay?” and, to be honest with you, nobody has ever told us, “This is your profile, this is your role.” You contribute to the show what you contribute because of who you are, your experience and your expertise. No one does Michael Bonacini better than Michael Bonacini. No one does Alvin Leung better than Alvin Leung.

But I think you’re right. The multiculturalism. The fact that I think in America they have found their regional cuisine roots and there are a lot of distinctive roots to their culinary scene. We are just at the tip of the iceberg with that in Canada and realizing that East Coast seafood and people and food and culture is different from that of Montreal or the Prairies or the West Coast. We share a same love of our country and the diversity of it but, boy, we are incredibly diverse, and sometimes it takes a long time for us to be able to realize and understand what is Canadian cuisine and what is Maritime food because it is so varied. When we started Canoe, which is Canadian cuisine, people didn’t understand why we had canushi – our version of sushi. Well, when James Beard, the grandfather of American cooking, was asked what is American food, his answer would be “It’s whatever we eat at home.” I think that’s a wonderful blanket statement and I latch on to that quite often. We did our version of sushi, we used some beets, we used local seafood, we added wild rice, we used uni from the East Coast. That’s why it’s a part of our Canadian heritage and culture. We love to show that off.

TR: What is your favourite part of doing the show?

MB: There are so many wonderful parts of the show. What really is fascinating are the number of people that come from all walks of life – young, middle-aged, stay-at-home moms, single parents, engineers, electricians, artists, media individuals, who have this incredible desire to learn, grow their culinary skills and be mentored by three individuals. And everyone knows the premise of the show. It’s tough, it’s gruelling, we don’t hold back. Things are going to be said that make you feel like you’ve had a blow to the belly. You come out of a group challenge with a bit of a bloody nose, but it’s like they say, “Bring it on! This is my time,” and that to me is just incredible.

TR: Do you get sick of tasting the food?

MB: We taste so much food on set. That’s why we like it when it starts to wittle down to only 10 or 12 home cooks because there are less dishes to taste in a day. Even in my business,  we will do lots of recipe testing and recipe development, and I get involved in tastings. My wife gets upset when I show up at the end of the night and I say, “You know what? I forgot to tell you I had a tasting today. I’m just not hungry.” And as I’m getting older, I have to watch what I eat and I am more conscientious of what, when and how much I eat. But tasting is an important part of feedback, menu development and making food exciting.  And chefs need to constantly taste no matter how many times you’ve seared the sea scallop and made the wonderful leek purée and had the leek crisps. You’ve got to keep tasting it because you’re only as good as the last dish you put out.